Strand views for €1.65m in Sandymount 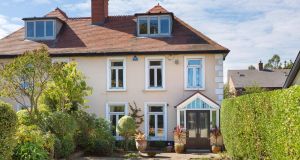 Exterior of the house on Sandymount Strand. 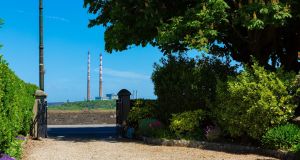 The amazing view, with the Poolbeg chimneys in the distance. 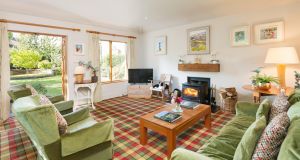 A family room with solid fuel stove overlooks and makes the most of the rear garden. 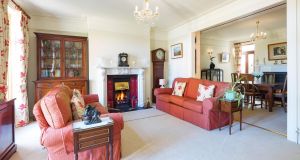 There are sliding, timber-framed interconnecting doors between the reception rooms. 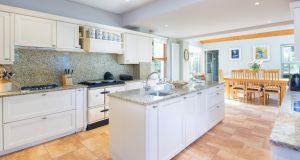 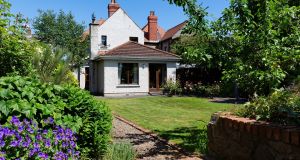 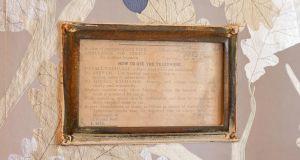 A small glass box on the wall inside the door contains instructions for using the telephone, which was one of the first in the area.

Great care has been taken to refurbish, extend and decorate this early 20th century house with a sensibility close to its original intentions. Probably built in 1910, decorative touches like a silver-leafed period effect wallpaper lend a fin de siècle feel while original details like cornicing, dado and picture rails hold the mood together.

There is much to be admired in a pair of embellished marble fireplaces in the formal, interconnecting reception rooms, both of which came from a house in Merrion Square, and the particularly fine views of Sandymount Strand from an eyrie-like, top-floor front bedroom.

There’s a scrap of history too. Castagno was one of the first houses in the area to have a telephone; the number was 895. A small glass box on the wall inside the door contains careful instructions for using the instrument.

Castagno faces Sandymount Strand but is set well back from the road. House and gardens fill a 0.2 acre site and the vendors, who have lived there since buying at auction in 2001, are downsizing.

The rear, southwest facing garden is particularly flourishing with mature trees and plants and has curving pathways, a block shed and a sheltered, botanical oasis at its end. Castagno is to be sold by private treaty, with agent Sherry FitzGerald seeking €1.65 million.

The wide entrance hallway, sheltered from the elements behind an outer porch, has both picture and dado rails. Polished wood doors lead to the reception rooms where there are sliding, timber-framed interconnecting doors. A pair of long, French-style Marvin windows overlook the front, gravelled parking area and distant Poolbeg chimneys.

A centre aisle in the large, Alno-fitted contemporary kitchen is topped with polished granite and Velux windows over the breakfast area give the whole area a sunlit feel. A family room with solid fuel stove overlooks and makes the most of the rear garden.

Ceilings on the first floor are again high and there is a notably long corridor linking landing and bedrooms. One of these, with views of an incoming tide, is used as an office. The main bedroom also faces front and has a cast-iron fireplace, windows with sea views, fitted wardrobes and en suite. There is a third bedroom on this floor as well as a storeroom and family bathroom with separate shower and bath. The remaining two bedrooms, and the most spectacular strand view to be had from Castagno, are on the second floor.

First Look: Dig In, the Maser-curated ‘art diner’ that’s about to open in Dublin
8