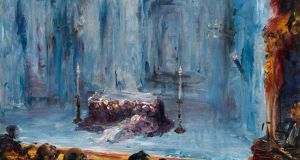 Jack B Yeats’ 1927 painting The Gaiety Theatre, Dublin (Romeo and Juliet – The Last Act) will feature as one of the headline lots at the forthcoming de Veres’ Irish art sale on December 8th.

The cast of the Charles Gounod opera Romeo and Juliet must have felt quite a bit of pressure when they performed at the Gaiety on March 2nd, 1926. Yeats was sitting in the audience sketching in his notebook two years after his painting The Liffey Swim had taken the silver medal at the 1924 Olympics in Paris.

The top lot in the catalogue is William Scott’s Still Life with Frying Pan, which is one of the earliest compositions of the artist to include a frying pan – the object above all others that reminded Scott of his childhood in Enniskillen and a quintessential Scott, according to Dr Frances Ruane, lecturer on modern art and design (lot 19, €200,000-€300,000).

Anton Hirschig’s work Feeding Time (lot 14, €8,000-€12,000) occupies a unique position in the history of modern art. In 2017 the Institut Van Gogh held an exhibition of Hirschig’s work as the artist was Van Gogh’s top-floor neighbour when they both resided at Auberge Ravoux in France.

More importantly, Hirschig’s name will forever be associated with Van Gogh as he not only features in Van Gogh’s letters – saying he initially thought he was too genteel to be an artist but later compared him to Arnold Koning – but also for the fact that Hirschig was in the next room while Van Gogh was dying from a self-inflicted gunshot wound.

He was tasked with relating the news of Van Gogh’s dire condition to the artist’s brother, Theo Van Gogh, and thanks to Hirschig’s involvement the two brothers were united for the last time when Vincent died during the night of 29th July, 1890, in Theo’s arms.

Finally settling on art, his portraits included writers such as Behan and Samuel Beckett, which is part of the sale (lot 21, €10,000-€15,000), and his portrait of Francis Bacon now hangs in the National Portrait Gallery in London. He reached the pinnacle of his career in the 1990s when he was honoured by Unesco in Paris with a large retrospective of his work in 1994. In 2006 the artist won the Sandro Botticelli prize in Italy for The White Blouse. He died in 2013.

“[Gray’s] workis rare on the auction circuit and these artworks represent the important part of his life that he spent with the London School in the company of Francis Bacon and Lucian Freud,” says Rory Guthrie, curator of the de Veres sale.

Three of the four works listed in the current de Veres sale sold in early October when an auction to benefit the Orentreich Foundation art collection was held in New York. Dr Norman Orentreich, the New York dermatologist and founder of the cosmetics brand Clinique, who is also credited as founder of the modern hair transplant, donated his collection of paintings to the Orentreich Foundation for the advancement of science.

“That often happens at auction,” says Guthrie. “Clearly the American auction house was not aware of the artist and Ireland is most certainly where the market is for works by Reginald Gray. This is the first time a body of his work has ever appeared in an Irish sale.”