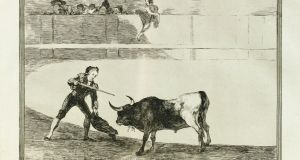 One of 33 prints by Spanish artist, Goya depicting bullfighting scenes 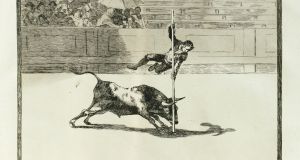 One of 33 prints by Spanish artist, Goya depicting bullfighting scenes

The best auction stories are often the result of chance finds or newly-discovered lost treasures. Recently in France, a family clearing out an old library found a complete set of 33 prints by the acclaimed Spanish artist, Goya depicting bullfighting scenes, known as La Tauromaquia, that had remained undisturbed for decades in a 19th-century ledger.

The prints are now set to go under the hammer at Sotheby’s in London on April 4th with a top estimate of £500,000 (€590,000). The prints are described as virtually flawless examples of the first and only contemporary edition that was printed for Goya from large copperplates etched and aquatinted by him in 1815-1816.

The prints were discovered when new heirs to the library in the aristocratic Château de Montignyin Northern France who were inspecting the family property pulled a large nondescript volume from the back of a library shelf. Séverine Nackers, head of prints, Sotheby’s Europe, said: “To find a complete set of Goya’s bullfighting prints with such historically significant provenance is a once-in-a-lifetime discovery”.

Francisco Goya (1746-1828) was a Spanish painter and printmaker. His most famous painting, The Third of May 1808, in the Prado, Madrid, shows a man being executed by firing squad during the Peninsular War between France and Spain.