Improved original in seaside village of Malahide for €1.69m 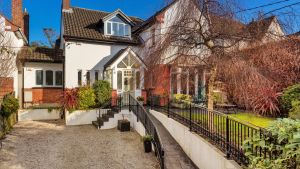 In the north Dublin village of Malahide, the adjacent developments of Grove Road, The Rise and The Mall have in recent years been designated by Fingal County Council as an architectural conservation area. How a council designates an area for such special attention varies but a key reason is that the buildings positively contribute to the character of the area.

In the case of The Rise and its near neighbours, it is also because the roads are well laid out and the houses mostly built from the 1950s have interesting architectural features including arts and crafts influences.

While Malahide has been growing outwards, these roads are very much in the centre of the popular and picturesque village and a stroll to the marina. It’s undoubtedly a prime location for families trading up, not least for its easy access to schools, transport, shopping and other services.

Number 4 The Rise, now for sale through Sherry FitzGerald, asking €1.69 million, has been greatly extended and altered, both inside and out, since it was first built about 60 years ago.

From the front garden, where there is off-street parking, some changes are clear to see in the painted render and redbrick home including the porch with its pitched roof, the side extension and the glazed bay window in the front reception room.

About 15 years ago the current owners also substantially extended to the rear – bringing the property to 249sq m/2,680sq ft to enlarge the upstairs bedrooms and to give the home a light-filled spacious eat-in kitchen with dining and living area. There’s also a sun room to the rear of the interconnecting reception rooms making it a home well suited to large gatherings.

Originally the hall in this house would have been quite small but the renovation changed that and it is now welcoming and bright with the staircase to one side and a pair of glazed doors opening directly into the kitchen and with views right through to the back garden.

The kitchen, with its painted timber doors, granite worktops and good-sized island unit, was made by Andrew Ryan in Gorey. There is plenty of room for a family-sized dining table and beyond this eat-in kitchen is a family room, bright and airy with a pitched roof and wall of glazed doors giving access to the back garden. A utility room is to the side.

Upstairs there are four double bedrooms, the largest has a walk-in dressing room and en suite; one of the other bedrooms is also en suite. Built-in wardrobes mean buyers won’t have too much bedroom furniture to source. The family bathroom is also on this level and there is a further shower room downstairs.

Features added for comfort and style include underfloor heating, an integrated sound system, walnut and oak floors and double-glazed timber windows. The Ber is C3.

A patio area directly outside the rear of the house continues down one side to get most of the sun, and the garden – about 100ft long according to the agent – is well planted with mature trees and shrubs fringing a lawn.

My husband had to become my carer after we had our son. I was diagnosed at 26
9 Life after an ectopic pregnancy
10