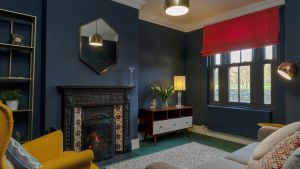 East Wall Road runs along the Tolka River joining Annesley Bridge to Alfie Byrne Road. It overlooks Fairview Park to the front and the terraced houses have small but south-facing yards with valuable pedestrian and bike rear access.

The owner of number 46, a building surveyor, bought the circa 1935-built property in January 2015, paying €155,000 for it, according to the property price register.

“The house was in rag order when I bought it,” he recalls. “It needed everything done to it.” This included an insulated, steel-reinforced front door and triple-glazed uPVC windows to dial down the sound of buses and idling traffic as well as the rumble of the odd diesel train passing by on the adjacent rail line. He took up the ground flooring to install a damp-proof membrane with concrete overlay and insulated and dry lined the exterior walls. He also rewired and replumbed the property, and put on a new roof, adding new tiles to the front while reusing the old ones at the back of the house.

The front was soda-blasted to remove the pink paint that covered its pretty red brick exterior as well as the black paint covering its granite windowsills. He estimates he spent about €150,000 on its renovation, availing of mates’ rates from friends in the building industry and doing a lot of the manual labour himself.

All the hard work has delivered an impressive B3 Ber rating to the 72sq m, two-bedroom house, which is now in mint condition.

The front room has an open fire with a reconditioned fireplace fitted with new tiles. The walls are painted in a deep blue, Mussel by Colortrend while underfoot is a jade green wool carpet, scotch-guarded to protect it from spills. He doesn’t recall the brand but says the salesman told him it was the same carpet that David Beckham had in his home, although he didn’t say which one.

He retained the original interior panelled doors and replaced some of the architraving matching it to the original upstairs.

The hall has a smart arch and the space is floored in a timber-look laminate, the same one that has been used in the dining room to the back of the house. Here some of the brick in the original chimney has been picked out to accentuate the arch there, and storage has been installed below.

The kitchen is in the return. Set out in a c-shape it has a full-size fridge freezer, double oven and a five-ring hob.

The property’s bathroom is on the return above and the main bedroom overlooks Fairview Park to the front and the green steel footbridge that has you in this large open space in under a minute. While north-facing the view is pretty impressive, especially when the tide is in.

There is a second double bedroom to the back and there is a further 13 square metres of space in the converted attic that the owner currently uses as a home office. The views from the roof light here frame the Dublin Mountains and many of the city’s landmarks.