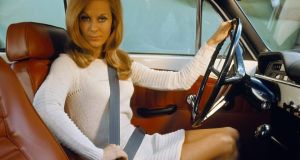 After two months of relentless advertising pushing the desirability of 191 number plates and any number of new features, it is noticeable that car commercials never mention the seat belt – and why would they, now that belts are as fundamental as wheels and a windscreen?

It wasn’t always the case, however. Basic seat belts are nearly as old as motoring. The first patented design arrived in New York taxis in 1885, as a safety feature. After that engineers tried various designs to hold drivers and passengers in place. In Ireland seat belts have been compulsory for drivers and front-seat passengers only since 1971.

And the belt that is now universally used, the three-point seat belt, wasn’t designed until 1958, by a Volvo engineer, Nils Bohlin. Until then, car seat belts had been of the style still used on aircraft: two-point versions that met in the centre, closing at the driver’s stomach. Bohlin’s design, which added the strap that comes down over the shoulder, and moved the buckle to the side, secured both the upper and the lower body.

Like all good designs, it was as simple as it was effective, and it was soon used by all leading manufacturers. As a new safety feature, it was first offered as an optional extra, but it was such a clear improvement over two-point belts that by the 1970s front seat belts – all of them three-pointers – were compulsory in most countries.