‘It’s vulgar, but our Christmas tree is full of memories’

Philip Judge’s tree is adorned with years of decorations, both tasteful and tawdry 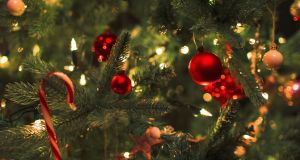 Faint echoes of adult choices made before we had kids haunt the tree.

Christmas is almost here and I am just where I want to be: in an armchair, a glass of something sticky at my elbow, scoffing Christmas cake and contemplating our decorations. Earlier I foraged holly from the hedgerow, threaded it through a wire coat hanger pulled into a circle and tied it together with strips of last year’s festive ribbon to fashion a wreath for the front door. Strips of ivy and clusters of holly berries are draped across the pictures in the sitting room. The stove flickers in the corner. Off-cuts from the Christmas tree which I threw on the flames give up subtle hints of pine which mingle with the spices from the cake and the rich bouquet of the wine. The ambience is seasonal, muted and classy . . . except for the dazzling corner where the tree itself triumphantly shouts its presence in a blizzard of vulgar gaudiness.

Our tree is now adorned with years of acquired decorations, some 'tasteful', some tawdry. I suspect my wife places my particular contributions in the latter category

In terms of balance there is no contest. The tree wins hands down. When I look elsewhere, the room’s otherwise agreeably elegant mood pleases my adult mind but my eye is irresistibly drawn back and the giddy glitz gladdens my childish heart. Our tree is now adorned with years of acquired decorations, some “tasteful”, some tawdry. I suspect my wife places my particular contributions in the latter category, though she would never say so. Certainly our only bit of tinsel was bought by me. I remember getting it, along with six shiny red balls, to dress a tiny potted tree, in the tiny city flat we rented two decades ago. The tinsel is a bit ratty now and only three balls survive but each year out they come and up they go to join the accumulated annual additions – each with their own associations.

The ones crafted by our sons evoke the age they were when they made them – like a decorative equivalent of the yearly pencil marks we make by the kitchen door to record their heights every birthday. The younger boy’s latest ornament, made at school last month, is a picture of him festooned with unfamiliar festive accessories. My wife had suggested he open the box of decorations early to take a Santa hat to class for the photo shoot. He was outraged at this suggested breach of Christmas protocol – you absolutely did not open the box before putting up the tree – so he borrowed trinkets from his pals instead. His brother’s first offering is a grey plastic ball partly studded with clear plastic beads. He found it, aged three, in a damaged goods bin while Christmas shopping. Handing over “his own money” – which I’d just given him – he bought it for his mother saying “It’s beautiful. . . like her.” His words made it so and there it still hangs.

I miss a jolly Santa who held night lights, which we lit, until he got badly burned. The boys were younger, a deformed Santa with a melted face verged on blasphemy

Then there’s the sinister snowman. Battery-operated with googly eyes, a pointy carrot nose and what look like vulture’s feet, he lurks in the lower branches, but if you set him down and squeeze his hand he jerks convulsively across the floor singing Let it Snow. This used to scare the bejaysus out of the older boy when he was a toddler but now merely deranges the dog. The snowman had a cousin on skis but he went off piste years ago and regretfully, was too badly damaged to keep. I also miss a chubby, jolly Santa who held night lights, which we occasionally lit . . . until he got badly burned. The boys were younger and fervent believers – a deformed Santa with a melted face verged on blasphemy and caused nightmares – sadly, he also had to go.

Other amusingly kitsch items have taken their places but interspersed among the baubles are a few, more sophisticated bibelots. Faint echoes of adult lives and adult choices made before we had kids, these ghosts of our past independence haunt the tree. I like the clusters of coloured cut-glass beads which glimmer discreetly when backlit by the tree lights and my wife loves the simple, unadorned, white porcelain cherub who always nestles in a secure nook. Perhaps we kid ourselves and these kick-knacks are just as trashy as all the rest? Maybe - and, to be honest, I still love the tinsel. My most particularly remembered childhood ornament is a thing that crowned the tree. It was a silver Satsuma sized sphere with a golden eyelike indentation facing front and a spire at the top reaching almost to the ceiling. It was fragile and may not have lasted more than one Christmas but I loved it.

I wonder which of our ornaments will linger longest in the boys’ memories. I asked them what their favourites were. They each officially nominated the dishevelled angel that perches drunkenly on the treetop but actually they prefer the candy canes and foil-wrapped chocolates. These are diminishing rapidly – although they both claim innocence – but I have more stashed away. Neither are expert at finding hiding places – unlike an uncle of mine who, as a boy, barrelled into my grandmother’s kitchen shouting “Mammy! I don’t have to ask Santa for a cowboy outfit because I found one in the hot press!”