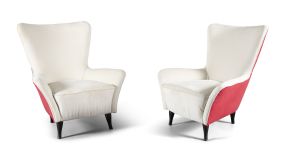 After the success of its first Mid-Century Modern sale last December, Adam’s on St Stephen’s Green will hold its second sale of some classic works from the masters of modern design on April 30th.

Featured in the sale are pieces by Gio Ponti, considered to be the godfather of Italian mid-century style, whose career extended well beyond furniture design. As a trained architect his most famous work is the Pirelli Tower in Milan, described by architectural historian Hasan-Uddin Khan as “one of the most elegant tall buildings in the world”.

Similarly, fellow Italian Ico Parisi had a career that encompassed much more than furniture design. Also an architect, he worked as an industrial designer, painter and photographer. A pair of his wooden valet stands caused a bidding frenzy at the December sale, selling for €3,200 – more than double their higher estimate. Five of his works now feature; most notably lot 42, a striking rosewood and glass coffee table with rotating shelves (€1,000-€1,500).

Most unusual is lot 52, which is part of a modular wardrobe set produced by Guido Faleschini for French luxury brand, Hermès. The company sold these sets in the 1970s from its flagship Paris store. Its suede finish will divide opinion – collectors will either fall head over heels for the cabinet which would work well in a small bedroom, or decide this piece is not for them at all (€1,500-€2.500).

There is an array of lamps and light fittings – many with brass details. Lot 88 is a pair of Lucinella wall lights by Angelo Lelli which is already creating international interest according to Nicholas Gore Grimes, curator of the sale (€3,000-€4,000).

As a backdrop to these cool contemporary designs are striking artworks which include Cadmium Red Deep on Black by Turner Prize nominee Callum Innes (€20,000-€30,000) and work by Alan Davie, the jazz musician whose work form part the Peggy Guggenheim Collection. His Magic Fountain Number 5, an oil on canvas with sexually-charged symbolism, is seeking €10,000-€15,000.

Maher’s work is in significant international collections including the British Museum and the Museum of Fine Art in Boston, in addition to a major exhibition held at the Irish Museum of Modern Art in 2012.

And as an indication how mid-century furniture marries well with non-contemporaneous art, lot 107 is a signed and numbered lithograph (94/150) by Pablo Picasso. His Head of a Woman is listed with an estimate of €600-€800. See Adams.ie