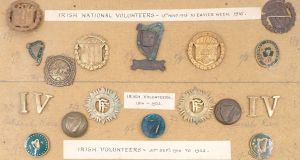 Sleeper hit: some of the badges and medals that sold for €10,000 at John Weldon’s fine jewellery auction

Many of us took to clearing out our homes during lockdown, but for one Dublin family a lockdown clearout of the garden shed unearthed a set of Irish National Volunteer medals that fetched the tidy sum of €10,000 at John Weldon’s fine jewellery auction on Tuesday last.

Though placed for sale with a €100-€200 estimate, Weldon had felt in advance that they might attract attention. The medals belonged to the grandfather of the family in question, and they had sat in the garden shed for years until the decision to clear it out was made in March.

Discussing why the medals made so much, auctioneer John Weldon said: “I think it’s down to the condition of the buttons and badges. They are all original and genuine from the 1910s to the 1920s, and finding a collection such as this is rare. Many collectors who viewed them prior to the sale on Tuesday were amazed to see so many in one collection, and the selling price reflected that.”

In what Weldon describes as one of the best auctions he has ever held, another medal, also found in the same shed, achieved well over its listed estimate of €200-€400.

The gold Irish 1916 commemorative medal, weighing approximately 15.4g, is from Dublin and dated 1940 with papers that state it is a badge of Cumann Óglaigh na Cásca (Easter Volunteers Association). Measuring 5cm by 3cm, it achieved €2,000.

“This is down to rarity, pure and simple. I understand they made quite a few in silver, but very few in gold. You must remember that these were made in 1940s wartime so precious metals were very rare, which makes this even rarer today,” says Weldon.

In other lots the price of gold was reflected in prices achieved for sovereign coins. “It’s all down to the price of gold. Sovereigns are 22ct weighing 7.98g for a full coin and a half sovereign weighs 3.99g. As the metals’ value rises – which is currently happening – so does the value of these coins,” says Weldon.

Full sovereigns are currently fetching €350, while half coins are achieving €180 each, making them a stable investment but nothing like the treasures that can sometimes lurk in the back of garden sheds.