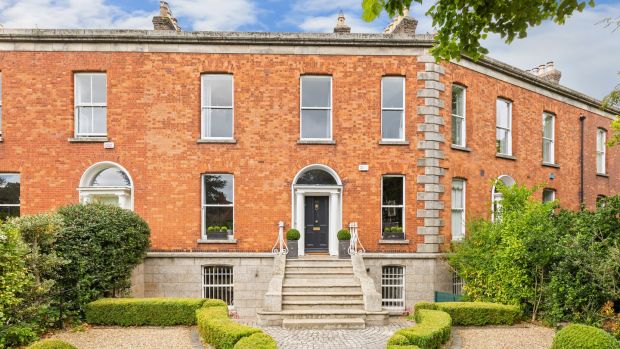 Set in a terrace of 11 houses, number 83 Anglesea Road has the distinction of being one of just three double-fronted properties on this popular Ballsbridge road.

The location, on one of Dublin’s historic and more pleasantly winding thoroughfares, is equidistant between Donnybrook and Ballsbridge villages, which provide a great selection of bars, restaurants and sports grounds including Old Belvedere Rugby Club, the RDS and two cricket clubs – Merrion and Anglesea – all within a short stroll.

When the property – which at one point was rented by former politician Shane Ross – last sold in 2017 for €2.2 million (it was seeking €2.35 million at the time), it was in excellent condition. However, the current owner has further upgraded the two-storey over basement property since.

She admits to having a passion for interiors having lived in locations all over the world for the past 20 years. As a result of all these travels, she has drawn inspiration for the decor which the house now displays. Her collection of art – which was mostly sourced in Switzerland – now stands out against the subtle off-white backdrop.

Reclaimed oak parquet flooring, which dates from 1910 and was sourced in Essex, was laid throughout the 301sq m (3,246sq ft) property which itself dates from about 1850. In addition, an Italian craftsman was taken on to apply stucco walls in the front hallway.

New panelling was added on the walls of the formal reception rooms at hall level, and the effect adds both texture and interest when set against the tall ceilings and period details.

The garden level of the property is particularly lovely, and features a Dalkey Design kitchen – which has been repainted – and an informal family room that opens out to a limestone patio to the rear.

“It feels like you are in the countryside in the back garden,” says the owner, who gave the outdoor spaces – which were originally designed by Irish Times gardening columnist Fionnuala Fallon – a recent upgrade. With a west-facing aspect to the rear, this space has new plantings of box hedging, white agapanthus and hydrangea along a cobbled limestone path.

A lovely old apple tree provides dappled shelter from the sun to the rear of the garden – where a new barbecue area and second al fresco dining space have been located – surrounded by topiary and tree ferns.

This space is also occupied by a substantial garden room, which has also been given a swish makeover, and is now used as a guest suite, in addition to the three bedrooms in the main house.

It would make a perfect granny flat or separate space for an au pair, and has the benefit of a garage to the rear that will happily accommodate two medium sized cars. It would also work as a very fine home office – an important benefit considering the increased trend among people working from home brought on by the coronavirus pandemic.

The main house also has a small home office, decked out with custom-built shelving and warmed by an open fireplace.

There was a fourth bedroom in the main house, but this has since been converted for dressing room use by cabinet-maker Michael Farrell Kitchen and Furniture Design in Wexford, who also installed clever storage solutions and high-quality custom built-in wardrobes throughout the property.

The family are moving to a new property with a larger garden. The children are now grown up, but the two family dogs – one of which is almost the size of a Shetland pony – require more space to run about.

Number 83 is ideally placed within reach of a range of excellent schools, with both St Michael’s and Teresians just up the road and Gonzaga, Muckross, Sandford and Alexandra colleges also within easy walking or cycling distance. It is a 10-minute walk to Sandymount Dart station, with many bus route options from Donnybrook and Ballsbridge to the city centre and UCD.

Houses on Anglesea Road have proved to be a good bellwether of the health of the property market. Recent sales include a penthouse in the Dunluce development which sold for €1.158 million, and where two-bedroom units are selling for €669,000-€750,000.

Number 83, with floor space running to a generous 301sq m (3,246sq ft) plus an additional 70sq m (753sq ft) in the garden room and garage, is in turnkey condition and is on the market through Knight Frank seeking €2.5 million.