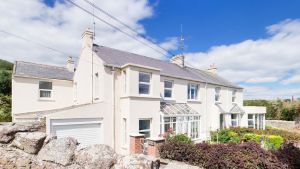 Set in the heart of the picture-perfect village of Dunmore East on the southeast coast, Cove House is at the top of a quiet, downhill cul-de-sac which ends at the delightful Ladies Cove, a sheltered stony beach.

As views go, the panorama is hard to beat. The cove is a lovely spot that’s beloved of a small group of regular swimmers. The lure of other golden-sand beaches within five minutes’ walk draws the crowds in summer; but Ladies, in its slightly more secluded setting, is something of a hidden gem. Beyond the attractive cove itself, the vista expands to Hook Head lighthouse in neighbouring Co Wexford.

Also within easy walking distance is Dunmore’s lovely park, which also enjoys sea views. There are tennis courts there, as well as a couple of popular swimming spots.

The house is located across the road from Azzurro, a popular Italian restaurant in a village with a range of great choices when it comes to dining out and bars.

Location aside, the deceptively spacious 265sq m (2,852sq ft) Cove House itself has lots to offer as is. But a little investment in design and refurbishment could really transform this property into something special.

The current owners are the family of Gretta and Dr Brendan O’Farrell. Dr O’Farrell passed away some years ago, and the children are now reluctantly selling the home they grew up in, following the death, in recent months, of their 90-year-old mother.

Previously Kilkenny-based, the O’Farrells bought the house in 1977 as a holiday home. A short few years later, they could no longer tear themselves and their children away at the end of each summer. Dunmore East became home to the couple and seven of their eight children.

Michael Ó Fearghail, the eldest of the children, was already married and living away when his family moved in. He describes the childhood his younger siblings had growing up there as blissful. Soon his own children, other grandchildren and later great grandchildren added to the throng.

Every summer the house would be packed to the rafters, Ó Fearghail explains, but when you have access to the limitless garden of the sea on your doorstep and a beautiful park around the corner the house never felt too crowded.

The house was built in the early 1800s, beside the oldest building in the village, the remaining tower from what was originally a 17th-century four-towered fortification. Sandstone salvaged from the demolished original structure is thought to have gone into building Cove House, which has gone through some changes over the years since then.

Originally a thatched house, the property was reroofed in slate. It was extended over time and eventually split into two dwellings. Still substantial enough in size, Cover House is a five-bed, with two bathrooms. The rooms are generously proportioned, allowing scope for en-suites.

There’s a roomy kitchen and comfortable sitting and dining rooms. A lean-to porch at the front of the house, while unimaginative in design, is nonetheless a bright, appealing space, looking out across the low-walled front garden overlooking the cove. It’s a sun trap and a space big enough to hold a couple of comfy chairs. Whoever buys Cove House is likely to reconfigure things entirely to take full advantage of the ideal setting and include modern comforts.

Building bridges: How polyamory made me a better friend, lover and person
2

The Debenhams picketers: ‘We are like a little family’
6

Ross O’Carroll-Kelly: ‘They want us to vacate this place so they can use it as a love shack?’
10