Art trove built from bricks and mortar on the block 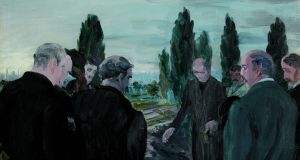 A collection of Irish art and furniture from the estate of the late housebuilder Patrick Joseph Kelly will be auctioned by Sotheby’s in London on March 18th.

A towering figure of a man, known in the business as “Gentle Paddy”, Kelly was a native of Suncroft, Co Kildare. After training as a plasterer and working in London, he set up Kelland Homes in the 1970s along with Joe Shannon.

The company built thousands of houses in Dublin, mainly in Clondalkin, Tallaght and Rathfarnham and was noted for the consistently high quality of its work.

A man of many interests, his son Patrick recalls that, of all his father’s passions, Irish art and antiques were to the fore.

He purchased a large period home in Dublin in 1980, and subsequently a Georgian townhouse at 44 Fitzwilliam Square in Dublin 2, which he renovated and restored to a family home shared with is wife Mary. Kelly passed away at this home in 2011 following a decade-long battle with leukaemia. The Sotheby’s sale is of the collection amassed by Patrick and Mary over a 40 year period.

“My sisters and I have memories of accompanying our parents to viewings in draughty old country houses, or stopping by an auction where inevitably a bid would go in,” recalls Patrick. “It will be hard to see it go, however we have loved having these pieces in our family, and now hope they bring the same joy to others.”

Kelly’s first art acquisition was O’Mahonies’ Point, Killarney by Harry Kernoff, the painting of which his son Patrick says: “It was a very special purchase, and one he considered for quite a while before buying” (lot 41, €11,800–€17,700).

Killarney also features in View of Killarney (with the passage to the upper lake) by William Ashford. This important painting was previously unknown to scholars until it was exhibited by Desmond FitzGerald, Knight of Glin, at the Age of Elegance: Irish Art of the 18th Century, at Lyons Demesne in 2007.

Ashford was one of the key figures in the development of landscape painting in 18th century Ireland, and FitzGerald described this painting as “Ashford at his finest” (lot 78, €200,000–€300,000).

The sale also features works by 18th century landscape artists Robert Crone and John Butts, both of whom are rare, and lot 107, A River Landscape (59,000–€82,500), is what the auction house refers to as “an exciting rediscovery” as the painting was formerly attributed to George Barret, but has recently been discovered to be an important and extremely rare masterpiece by George Mullins. There are only a dozen or so fully attributed Mullins pictures that survive, and the vast majority are in public collections.

It seems that the tide of interest in Jack B Yeats is still surging with Whyte’s achieving €120,000 for Rusty Gates at their sale on Monday at the RDS.

Besides the Yeats collection, all eyes will be on lot 66, Deep Blues, which was exhibited at the Tate in London during a 1972 retrospective of the works by William Scott.

In the 1960s and 1970s Scott pared back his work distilling subject and form into highly restrained compositions. This painting features familiar motifs of simple domestic tableware against a blue and black background. (€354,000–€590,000).

In tandem with a great collection of Irish art are some important pieces of period furniture. One of the nicest beds to come from an Irish home in recent times is lot 106: a French empire gilt bronze lit en bateau from 1810. Beds from this period were considered important architectural features in a home, and would have been placed parallel to the wall for maximum visual effect. (€11,800–€17,700).

A pair of George II painted satinwood demi-lune card tables from 1790, attributed to Seddon, Sons and Shackleton whose clients included the Empress of Russia, would sit perfectly either side of a period fireplace (lot 35, €11,800– €17,700) and the pair of Regency-style brass hall lanterns (lot 2, €4,750–€7,100) could add the final touches to a gracious hall, as they did at 44 Fitzwilliam Square.

Lot 13, a set of 25 hand-coloured aquatints by James Malton is a rare offering, which recorded Dublin city at its zenith in the late 18th century. Malton trained under the renowned architect James Gandon, and the prints show his skilled eye for architecture. They are an important historical record of both the social changes and dramatic architecture that Dublin underwent in the 18th century. (€11,800–€17,700) sothebys.com