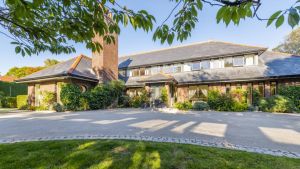 When The Birches off Foxrock’s Torquay Road was conceived in the 1980s it provided an exclusive enclave for wealthy executives to acquire individual sites and build out their dream homes away from the public glare. While nowadays Fort Knox-like hoardings shielding lavish domestic build projects are commonplace, back then the wealthy were still a little shy about promoting their status updates.

The Birches’ sites were sold with the requirement to build substantial two storey homes surrounded by granite boundary walls. It soon became home to a who’s who of high ranking Irish business figures including Paddy McKillen, David Doyle, Johnny Ronan and Sean Dunne.

Dunne was one of the early investors in the scheme, building Woodberry in 1984. Several years later he quit The Birches for Dublin’s most exclusive address when he purchased a newly-built property, Ouragh, on Shrewsbury Road in Dublin 4 for €3.8million.

He sold Woodberry for €2.9million in 2002 and the buyers Patrick and Karen Doran have lived here since. Patrick Doran successfully sold his Clondalkin-based consumer packaging firm, Americk, in 2016 to a Spanish firm in an undisclosed multimillion euro deal. He now heads up private investment firm Woodberry Capital. They have placed Woodberry on the market through Sherry FitzGerald seeking €2.975million.

With their family only starting back in 2002, Karen says Woodberry has been an excellent family home in which to raise their four children. The contemporary low rise design discreetly tucked behind electric gates and granite pillars has certainly stood the test of time. At 566 sq m/6,092 sq ft this is a substantial property but a smart layout means it still manages to feel homely rather than palatial and the finish throughout is of the highest standard.

Polished stone floors in the hall and marfil porcelain running through the entire downstairs living area lend a continental villa feel and also create a lovely flow from one room to the next.

A smart addition in 2007 (and who wasn’t hyperextending that year?) was a Hampton-style orangery in the kitchen living area. A double height lantern rooflight floods light into the space and anchors it as the heart of the home. A bespoke John Daly kitchen features hand painted wall and floor units, a Falcon five-plate gas hob and a vast cherrywood island topped in cream zefra travertine. The living area is made cosy by an Excelsior radiant fire while the room is mainly glazed with double doors opening out to the rear patio area.

Off this is a substantial children’s den that would happily double as an office or further living room, although these are amply provided for in a small cinema/tv room and the drawing room situated on the far side of the kitchen. With wood floors, a fine marble fireplace and fitted shelving the drawing room has a gentleman’s club feel complete with John Daly fitted butler’s pantry from which to dish out the gin and whiskey sodas. Wraparound windows continue here with double doors out to the patio at the front of the property - shrubbery and hedging shield it well from prying eyes.

The dining room has a lovely open marble fireplace and a fine mahogany dining table – included in the original sale – which Karen recalls originally came from Dáil Éireann.

At the opposite end of the house is further accommodation – part of that 2007 extension – that includes a luxurious guest suite and a fully fitted study. With separate door access from the study to the garden this area could be cordoned off if required as a separate living unit for a family member or staff.

Upstairs there are five bedrooms arranged along a long corridor running either side of the central staircase. To the right are three bedrooms – two with en suite – a large family bathroom, and a smaller room currently used as a gym though it could work as a further bedroom/nursery.

Apart from another double bedroom with en suite the entire left side of the property is given over to a very luxurious main bedroom suite. Utilising all of the roof space the bedroom itself has been smartly furnished with antique furniture while a retractable TV at the foot of the bed is a James Bond flourish. The bathroom is hotel standard with twin basins, a rainwater shower and Jacuzzi bath and beside it is a smartly fitted L-shaped dressing room.

Woodberry sits bang in the middle of its 0.4 acre plot and the garden can be accessed from all sides. The aspect is south west to the rear and south east to the front and side and, while not an enormous plot given the size of some of its neighbours, Karen says it has comfortably accommodated up to 200 people in a marquee to the side.

The Dorans are now selling and moving to Shrewsbury Road where an extensive refurbishment of a property they purchased in 2017 for €8.45million nears completion. One of the best remaining sites on the sunny side of Shrewsbury road, the property (formerly known as Fintragh) has been effectively razed to its gable walls and rebuilt to include an underground cinema and gym.

Far from downsizing, the Dorans are supersizing as their new home will be double the size of this Foxrock property.

Irish whiskey is the toast of National Organic Awards
10