A thoroughly modern bolt-hole that’s all Irish inside

The owners of a beautiful barn conversion holiday home in the Glens of Antrim gave Belast-based interior designer Patricia McGinnis the brief of kitting the home out only with items either made or sourced in Ireland. Video: Bryan O'Brien 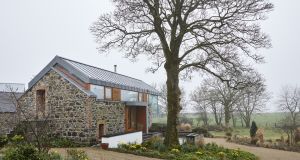 Nestled in the Co Antrim foothills, about 10 miles from Ballymena, is a thoroughly modern Irish barn that is a weekend bolt-hole for its owner Andrew Magowan, who comes from Antrim town.

The idea of coming back to Ireland was “not on my radar”, says Magowan ,who is based in London. That was until he and his wife discovered the property, one of several local Corkey stone farm outbuildings that have been reimagined by architects McGarry Moon and Loft Estates.

The stone façade of the building, which would have housed livestock below with a hayloft above, was retained, but the roof was raised to make the upper level’s internal heights habitable.

The zinc-clad roof appears to float, thanks in part to its clerestory timber windows, made by Norman Wallace Joinery, that frame its gable end, a delightful detail that helped the project win several Riba Regional awards in 2014.

Magowan says now content with a designer building, they wanted to put their own mark on it. “We wanted it to be Irish, to have a strong sense of design and craftsmanship, but not the shamrocks and shillelaghs of old.”

For help he turned to Patricia McGinnis, one of two sisters who run Maven, a homewares store and interior design service housed in a former memorial hall in Belfast that sells a cool mix of Scandi design and local makers and craftspeople.

“While it was already a home the brief to furnish it was that everything had to be made in Ireland or sourced within Ireland,” says McGinnis.

She put a shout out on Instagram and touched base with design curator Prof Alex Milton to confirmed many of the people she already had on her radar and she had “great freedom” to compile a menu of suggestions.

The owner’s request reflects a new-felt pride in Irish design, in our homegrown talents. Some 10 per cent of Maven’s sales are in Irish-made goods, but while people say they love it, they don’t necessarily want to pay for it, “but if we don’t champion these talents we will lose them”.

Dublin veteran furniture maker Simon O’Driscoll’s DC sofa takes centre stage in the living room, an open space with glass walls that frame the Co Antrim foothills and its farmlands. It has been upholstered in a tweed that was supplied by Stable of Ireland.

There is a fireside chair by Donna Bates, whose Parlour lamp is set atop a side table by Dublin-based Elements of Action. The lamp is inspired by the lighting in her parents’ dairy farm buildings, and its vernacular vibe lit up the Northern Irish design scene when she launched it in 2014.

Filling out the space is a round coffee table by Co Sligo-based Martin Gallagher and a stool by Stickman, aka James Carroll.

Underfoot is a Milano rug by Mourne Textiles, a tactile design that features hand-spun raw wool seams fed into the loom.

Elements of Action also made the 91 Narrow dining table, a reworking of the trestle-style that has a spalted beech top and steel legs.

Around it is a harlequin set of dining chairs, all found at auction, that includes pews found at auction that came from St Anne’s Cathedral, a heritage building that is also known as Belfast Cathedral and situated on on Donegall Street. These still have their pew numbers on the prayer book stands to their rears.

A vessel by Belfast-based Derek Wilson is the only object to adorn the dining table. The well-known ceramicist’s work is in museum collections, and is super collectible.

The pair love the place so much that they return at least once a month, often deciding at the last minute on a Thursday to escape London. Magowan loves the contrast. “Here there is peace and quiet. Yet I know my neighbours here way better than mine in London.”

He wanted a proper fire, and bought a Rocal wood-burning stove from Wilsons in Belfast.

Elsewhere there are beguiling blue and white ceramics by Adam Frew, and adorning one wall is a poster showing off Antrim’s county colours. Designed by Dublin company Caman and Co, it is one in a series of posters depicting each of the 32 counties in their GAA colours.

The kitchen, designed by the architects and fabricated by Kitchen Concepts, whose parts of it echo the form of the old farmhouse range and chimney, was already in situ, so McGinnis set about adding texture to it. She stacked Helen Faulkner Ceramics – cups, saucers, plates and bowls – on its open timber shelving so that would always be on show. Atop the Silestone countertops are chopping boards by Co Wicklow-based Two Wooden Horses and a wooden trivot by Superfolk.

Fergusons Irish Linen in Banbridge supplied all the bed linen, while the bed covers include throws by The Tweed Project and Mourne Textiles.

The bedside lamps and the floor light in the living room are by Mullan Lighting, and it was furniture maker Tricia Harris who made the bedframes, one of which is a tomato red. She also made the coat rack and wooden hangers in the hall.

Magowan says the beauty of this project is that everything in it feels fresh and vibrant, but very much of its place. “When I look around the house I know who designed and made everything, and why they made it. By knowing the back story it helps you appreciate each piece more. It adds a whole layer to their functionality and prevents them getting tired.”

McGinnis says the dressed home completely contextualises modern Irish design. “People have a perception that Irish design is very traditional in look, even verging on the twee, but while the craftsmanship in many of the pieces here is traditional the design is contemporary.”

Have you recently extended or renovated your home? Or built a new house from scratch? We’d love to hear how you got on. Please email homeanddesign@irishtimes.com

24 hours in Bundoran: ‘The town is mental. No one expected it to be so busy’
8 Tesla wants an electric Golf rival
9