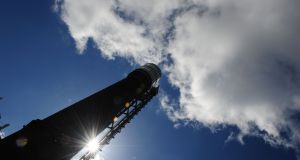 A few weeks ago I awoke to a radio report that a violent incident had happened in “Kevin Barry House in north inner city Dublin”. That was all listeners needed to know. No need for the name of a street, or neighbourhood – just that it happened somewhere in the vast area at the core of our capital city running from the Irish sea to Phoenix Park and stretching up to Clontarf and Glasnevin.

It reminds me of the clichéd view of Londoners past who were said to have regarded anything north of Watford as “The North” and further, more detailed, knowledge was unnecessary (something that anti-Brexit parliamentarians ignored at their peril).

North Inner City is an electoral area. On the other side of the river is Pembroke-South Dock – but I don’t recall encountering that term in news reports. We know its areas: such as Grand Canal Dock and Ringsend. No need for a catch-all name.

The recent horrors perpetrated in East Wall and Ballybough were mainly reported as being carried out in the “north inner city”. Yet those areas are closer to Grand Canal Dock and Ringsend than they are to, say, Stoneybatter and the east edge of Phoenix Park, the latter two also being in the north inner city. So for weeks, “north inner city” became a casual shorthand for East Wall. Again, why bother to be specific when it’s somewhere in that dodgy hinterland beyond Anna Livia?

And the fear of the whole area is not without foundation. It turns out that Kevin Barry House is near North King Street, not great news for those in happening Smithfield and Stoneybatter.

Life in all of these places is typically pleasant and harm-free. I’ve crossed the river northwards to live and have been so welcomed by neighbours: a general mix of creatives and those whose DNA is in the area, still living in the homes their forebears moved into when newly built. Family and friends are forever crossing the street to be with each other, and gathering outside homes for chats with pets in tow or gazing out of windows to keep an eye on their owners.

Naturally, it is impossible to declare anywhere in the world trouble-free. A friend brought her D4-residing sister to my home to show her how pleasant the area was – after said sister said it was no-go – and as they arrived drugs were being dealt on the street. Oops.

Wherever we are we want to know if we may need to avoid local danger which is why it would be extremely useful if media reports of incidents were more specific. Everyone has a right to know.

If “incidents” happen on the south side, reports name their location – we would be told if it took place in Crumlin, Ringsend, Rathmines or Merrion Square. We know these places and their names have meaning for us. Apart from offering useful information, specific reports would validate places. As humans we need recognition and identity. By identifying neighbourhoods we validate them rather than implying they and their residents are of so little importance they can be brushed over and lumped in with neighbourhoods miles away.

Now that the Luas is joining up, the two sides of the Liffey will be more closely connected and it is time to get to know a part of our capital city that has a growing role. Tourists go there in their hordes, more and more businesses are moving northwards and so will a greater mix of people as property prices on the south side climb back to the millions and beyond.

There is quite a smart bunch there already, such as the Morrison hotel, the Convention Centre, 3Arena, the IFSC and the Winding Stair restaurant. While these are on the river – which a friend has christened the North Bank (and north banks are south-facing) – there are also smart establishments farther in, such as Chapter One, the Hugh Lane gallery and Arnotts.

Ironically, once a person is validated and accepted by millions of fans they sometimes need to hide and where better than the anonymous north side? Tucked up Arran Street East, off Capel Street, is the white-stuccoed Hacienda Bar, looking as if it has flown in from 1970s Marbella. You must knock to gain entry and drinks are taken in a semi-subterranean group of rooms. It is where film and television crews have their after-parties, it is where Hollywood actor Matthew McConaughey hung out while he was in town; Ed Sheeran partied in the Hacienda after his 3Arena gigs. For the mega-famous, anonymous places are where it’s at – but those making and enjoying lives in the city don’t need to be written off.