Developer Myles Crofton has applied to replace his former home Renesca on Cross Avenue - valued at €5.5m - with a 33 unit apartment block 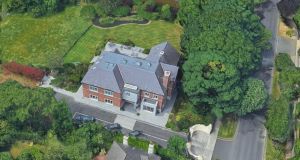 One of Dublin’s most lavish modern mansions looks set to be demolished and replaced with a five-storey apartment block.

Renesca, a 1,050sq m (11,300sq ft) building, was constructed by Myles Crofton of Avenue Homes on the grounds of Chesterfield House, on Cross Avenue in Blackrock in south Co Dublin. Crofton paid €47 million for Chesterfield in 2004, at the time making it the second most expensive Dublin home ever sold, with ambitions of building a dream home and developing an upmarket new-homes scheme on its grounds.

The dream home – with four storeys of accommodation, including a basement swimming pool – came to fruition, but the remainder of the site has lain idle for years. Ulster Bank, which financed the acquisition of Chesterfield House, secured judgments against the Croftons in January 2014 for more than €65 million, resulting in Crofton reportedly seeking bankruptcy in the UK in March 2014.

Ulster Bank subsequently sold the loans attaching to Chesterfield House, and Renesca by association, in 2015 to Cairn Homes and Lone Star as part of the €503 million Project Clear portfolio. The details of any agreement between Cairn Homes and the Croftons are private, but, following the housebuilder’s acquisition, it appears a deal may have been struck between the two parties that resulted in the family retaining Renesca and Cairn taking control of Chesterfield House and its 3.4ha (8.4ac) of development land.

In 2016 a planning application was submitted to reposition Renesca’s boundary walls to enlarge Cairn’s development site. In April 2017 Cairn released the charge it held on Renesca, according to documents obtained from the Land Registry, which also suggest that the multimillion-euro mansion is now unencumbered, with no debts registered against its title.

The house appeared in the property-price register as having sold for €5.5 million in recent months, and, according to the planning permission, it is now owned by a company named Renesca Holdings, owned by the Croftons.

An Bord Pleanála recently granted planning permission to Cairn for a development of 214 apartments and seven houses on the site of Chesterfield House, and it appears that the Croftons are now following suit. Last week they lodged a planning application to replace their expansive home with a five-storey apartment block fronting on to Cross Avenue, comprising nine one-bed, 19 two-bed and five three-bed units, above a basement car park with 37 spaces.

Based on the €5.5 million price paid for the 0.32ha (0.8ac) site, this would put the cost of each apartment site at €167,000 before demolition works and other site costs. Should permission be granted, Dún Laoghaire-Rathdown County Council will be given the option to acquire three one-bed units at the development at a cost of €485,800 each, according to the application, as part of the developer’s requirement to offer 10 per cent of the units for social housing.

7 tips to improve your sprinting
7