The Durrow auction house is holding a select sale of just 100 lots, most of them Chinese 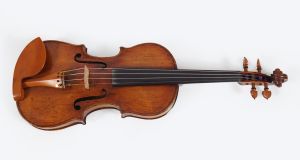 Sheppard’s upcoming sale in Durrow Co Laois on May 16th has just over 100 lots – far shy of the usual 1,000-plus items that usually feature in its monthly sales.

The sale – titled Masterworks, is a collection spanning eight centuries of artworks from around the globe. A selection of Chinese artefacts form the bulk of the catalogue, with pieces dating back to the 12th century.

The item causing most attention is lot 52, a large Chinese Huanghuali screen, which was acquired in 1990 by an Irish buyer in Beijing – and has since lived in Dublin.

“It definitely had a ceremonial function – due to its profuse carvings and may indeed have stood behind a throne, but it is impossible to know whether it was a Chinese emperor’s piece, or used on the authority of an emperor, but it is most certainly part of an imperial collection, ” according to Philip Sheppard.

In Chinese artefacts, five clawed dragon motifs symbolise imperial usage, and here they are represented by carvings in mutton fat and spinach coloured jade, against the back drop of ornate carved Huanghuali wood – noted for its distinctive colour and sweet aroma.

Huanghuali furniture has been popular since the Ming dynasty, and are sought after collectors’ items – a pair of cabinets sold for $300,000 in 2014 through Clars Auction Gallery in California. The very elaborate screen in Sheppard’s sale, which extends to 261cm by 276cm, is estimated to fetch €50,000 and €80,000.

In keeping with imperial pieces, lot 32, dating from 1810, is a French Empire ormolu bronze pen and ink stand from the Napoleonic period (€1,500-€2,500) and lot 3, a highly embellished long case clock standing at more than 7 feet tall, is what Sheppard describes to as “a museum quality example of the craftsmanship of French clockmakers in the nineteenth century” (€20,000-€30,000).

From the Americas is lot eight, a marble sculpture of Cupid and Psyche which Sheppard believes is “an American Indian representation of neoclassical figures”. The feathers on both subjects and animal skin cloak, together with the female form bearing ponytails, are what Sheppard attributes to the Native American Indian link. These symbols can also be found on the Capitol Building – seat of the United States Congress in Washington. (€25,000-€35,000).

From Europe, also attracting international attention is lot 18, an important Venetian violin attributed to a member of the Pelizon family dating from 1840 (€15,000-€20,000). The auction record for a Pelizon violin is €35,000, through Tarisio auction house in New York in 2011.

Though now US-based, the first Steinway pianos were produced in Germany – and the favoured keyboard by artists such as George Gershwin, Sergei Rachmaninoff and Billy Joel. The sale includes lot 17 – a boudoir grand piano from 2002.

In the selection of fine rugs and tapestries is lot 115, a “Donnemara” Donegal runner. Donnemara rugs were made by Donegal Carpets in the early 20th century in designs inspired by the Arts & Crafts movement. Early commissioned works are highly collectable pieces. Prices depend on size and condition; in 2005 a large blue carpet sold through Mealy’s auction house for €22,428, and the gavel fell at $85,000 for a similarly large piece at a Christie’s New York sale in 2003. Sheppard’s are seeking €3,000-€4,000 for the runner measuring 392 x 85cm, which depicts lotus flowers set on a blue and red background.

The sale of these special items is expected to attract bidders from 40 countries across the world, according to Sheppard.