Courgettes, I've had a few

Philip Judge: I entirely forgot about the whirlwind that hits the house when the horticultural quarter of our field is at peak production 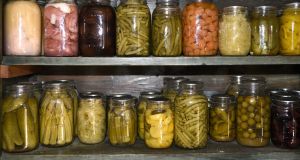 In earlier times, pickling and preserving saw people through the cold times and “hungry March”.

Having lived in Wicklow for fifteen years now I like to think I have the countryman’s subtle sense of the seasons but I still make rookie mistakes: like booking a family holiday for when the kitchen garden goes berserk.

It made sense at the time. We had a busy summer ahead: soccer camps, the Gaeltacht, family visits and working in the city. A week in the sun before the new school term seemed pragmatic and wise. I entirely forgot about the whirlwind that hits the house when the horticultural quarter of our field is at peak production.

Thrilled with the expansive possibilities of a whole acre, we optimistically planted eight fruit trees and four large vegetable beds when we first arrived. Romantic notions took root and grew to hard reality. Now every harvest time we are flooded with more fruit and vegetables than we can eat. Friends and family benefit – up to a point. At first we tried to offload the surplus on neighbours who had popped in for a cup of tea. Unfortunately many grew enough of their own and dodged our desperate offers, politely or otherwise.

I remember chasing a farmer friend from the door with some over large courgettes but he was up the hill before I was out the gate.

In earlier times people dealt with the glut by pickling and preserving. This saw them through the cold times and “hungry March” – that barren time between depletion of the winter stores and the first spring crops. Barring a sooner than predicted climatic catastrophe, or a larger than expected Brexit disaster, I expect our village shop to remain open through the dark months. There will be an assured and continuing supply of cereal, pizza and wine gums – on which our sons would happily subsist until summer’s return when the ice cream machine is switched on again.

So no one in our cottage is in any imminent danger of actual starvation. But I still feel a visceral need to pickle and preserve, despite some epic failures.

The loss of an early batch of preserved cucumbers is still a painful memory. The jars turned cloudy and began to emit dribbles of gloop. They fizzed when opened. Fermentation must have occurred, which was exciting – maybe I’d created a new liqueur? I can be fearless when offered dubious cocktails but mulched cucumbers in what looked like slug juice and smelt like buffalo piss scared me and into the compost went half a dozen large jarfuls,

My techniques have since improved as have my accoutrements: thermometers for jam; wide-mouthed funnels for chutney and spring-lidded jars for both now annually emerge for their languorous moment in the late summer sun. And for a few leisurely weeks the house is suffused with opulent aromas of rich spices and sugared fruits or vegetables; undercut by the tang of onions and vinegar; while a large pot of something alluring and sticky bubbles torpidly like a tropical swamp.

Jars are sterilised and labels are written: it can be a time of steady industry laced with mildly anxious speculation about whether this year’s chutney might merit a rosette in next year’s county show. I take a relaxed, Zen like approach to flavouring: proportions vary depending on either my mood or whatever’s most abundant in the orchard and garden. But with time being squeezed between the looming holiday and the blooming garden, there was an urgent, new ingredient – the sour spice of stress. The chutney may not be my best.

Summer usually seems to amble into autumn: not this year. The trees haven’t yet turned but the verges of the hedgerows have. The long grass was recently at its luxuriant August height before rain battered it into drooping submission. The nettles and cow parsley apparently grew to seed over night.

Nets were stretched wide between trunks of venerable trees to catch falling acorns. The gathering in was underway

Some aunts recently came to lunch and dispensed holiday money for the boys. They particularly admired the courgettes so I promised them some to bring back to the city. By the time I went to cut them they had grown into marrows. That evening, walking through the oak wood I was intrigued to see large tarpaulins hanging hammock-wise between trunks of venerable trees. On closer examination they turned out to be nets stretched wide to catch the falling acorns. The gathering in was underway throughout the valley.

Except for one sad corner. Mostly hereabouts the hay has long been cut, dried, baled and stacked in the barns for winter. The farmers always choose their moments well. Every summer I am again impressed at the discriminating judgement exercised in deciding exactly when to take swift advantage of the ever unpredictable weather to make hay.

But this year someone got it wrong. At the edge of the village a field of sodden bales is slowly rotting – thoroughly drenched before being moved to shelter and now soaked beyond recovery. The melancholy waste triggered memories of my lost cucumbers.

My mind was focused and the days before heading to the airport were a dizzying mix of bulk buying sunscreen, pickling shallots, packing swimming togs and freezing French beans.

What is the best exercise for you?
Real news has value SUBSCRIBE