Century-old Dublin flats to get new lease of life 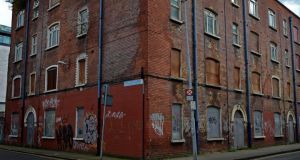 The building at the junction of Moss Street and Gloucester Street, Dublin, which will be redeveloped by Dublin City Council. Photograph: Eric Luke

A derelict Dublin flat complex built 100 years ago is to be restored and redeveloped as part of an almost €9 million investment in new social housing for the city.

The large tenement block on the corner of Moss Street and Gloucester Street, close to City Quay, was built in response to the 1913 housing crisis and has lain derelict for almost a decade.

The National Association of Building Co-operatives (Nabco) plans to refurbish the flats, retaining their original facade and extending the building to the rear, under licence from Dublin City Council. The apartments will then be offered to tenants from the council’s social housing waiting list.

The Moss Street flats complex is one of three social housing construction projects the co-operative housing body plans to undertake in the city.

Nabco is also planning to build apartments on North King Street, which will involve the construction of three blocks on a derelict site of 19th-century buildings just a few doors away from the Cobblestone pub in Smithfield. The third project is outside the city centre at a just under one-acre site on Richmond Road, backing on to the Tolka river in Drumcondra.

The latter two sites are owned by Nabco, which is seeking developers in advance of applying for planning permission for all three sites. Once the housing has been constructed, Nabco will buy the units from the developers at a predetermined price.

While the exact number of new homes has yet to be determined, Nabco expects about 100 units will be built, most apartments, all of which will be offered to tenants on the council’s housing waiting list. Labour TD Kevin Humphreys said the Moss Street project would bring relief to what was a district of acute housing shortage.

“This is an extremely positive development for an area where the housing need is very great, with very long waiting lists, but there is very little social housing available.”

Mr Humphreys also commended the organisation for its decision to reuse and preserve a historic city centre building.

“The flats had to be detenanted some years ago because they had become unfit for habitation and could not be brought up to modern standards without significant redevelopment. But these are great old buildings that are part of the architectural history of the city and it will be great to see them brought back into use.”

The Moss Street flats were among the earliest purpose-built social housing constructed by Dublin Corporation (which became the city council) following the slum clearances in the early years of the last century.

The flats were completed in 1917, but were commissioned in response to the 1913 housing crisis, when the collapse of two houses on Church Street, which resulted in the deaths of several tenants, prompted government intervention to try to solve the problems of Dublin slums.

The result, however, was that most of the historic fabric of the docklands was lost, making the Moss Street flats, excepting some Georgian and Victorian housing on Pearse Street, among the oldest housing in the area.

The flats fall within the city council’s George’s Quay local area plan zone, which envisages the creation of a new “midtown” for the city south of the Liffey to Pearse Street and from Hawkins Street to Lombard Street.

Irishman in Sweden: Covid-19 testing is not widespread here
8