New housing schemes usually provide a showhome, and these houses won't be ready to move into until the autumn 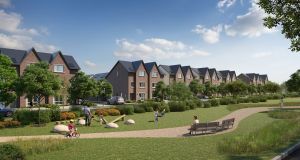 Builder Cairn appears confident of a ready uptake at its Mariavilla scheme.

The launch this weekend of a new homes scheme in Maynooth is likely to attract good buyer interest given its central location in the popular university town.

Builder Cairn certainly seems confident of a ready uptake at its Mariavilla scheme with prospective buyers only able to view plans for the scheme when they turn up at the marketing suite on Saturday and Sunday morning.

Buying off plans is a practice more often associated with large apartment schemes at the early part of the construction process . New housing schemes on the other hand usually launch with a furnished showhome, the thinking being that young couples and families about to make the biggest investment of their lives need a little help envisioning how that new life might look.

This is changing however says David Cantwell of Hooke & MacDonald, the joint selling agent for the scheme with Coonan New Homes. “It’s a trend we’re seeing more with bigger builders, especially a company of Cairn’s size, where they are rolling out scores of houses on multiple sites around the city. If buyers want to see what the homes will be like we can point them to similar homes already built in other areas.”

Cantwell says prospective buyers of the three- and four-bed homes at Mariavilla need only look to Cairn’s recent Glenheron scheme in Greystones where units are built to a similar interior layout, although the Maynooth exteriors will have brick-faced, rather than Glenheron’s stone-faced facades. The houses at Mariavilla are due for completion from September on.

Cantwell also suggests the Maynooth houses are at the luxury end of the spectrum and are likely to appeal to homeowners trading up, or down. The first 20 A3-rated homes releasing in the 200-plus unit site will be priced from €365,000 for a three bed to €480,000 for a four bed. Still, it will be hard to beat the new home viewer ritual of donning the plastic blue shoecovers for the weekend showhouse shuffle.