Postman pad: Village post office with a history gets new lease of life

Rosemary Brown was sure of one thing when she inherited an old post office that had been in her family for generations: the old building, which has a fabled past, would have to be restored

The Old Post Office in Kilmacthomas, has been sympathetically restored by Rosemary Brown who has fond memories of growing up in the house when it was a hub of activity in the tiny Co. Waterford village. Video: Bryan O’Brien 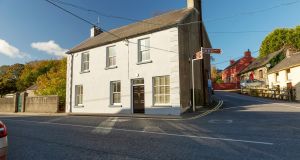 Set against a backdrop of the Comeragh mountains and situated on the banks of the River Mahon, Kilmacthomas is a picture-perfect Waterford village built around a long sloping street lined on either side by shops, businesses and homes. The village is nestled beneath the seven-arch railway viaduct which is nowadays a cycle/walking path and one of the highlights of the Waterford Greenway.

At the top of the village, on a corner overlooking the main street sits a house known as the “old post office”. In a village remembered as the setting for the “missing postman” mystery, an unsolved case surrounding the Christmas Day 1929 disappearance of postman Larry Griffin, it’s no surprise that the “old post office”, Griffin’s last place of work, is part of local lore.

Rosemary Brown, who owns the building, is very conscious of its history and the importance it has played in people’s lives over several generations.

The building has been in her family since the 1830s and its history goes back a long way. In a travel guide published in 1850, writer Archibald Stark describes the “comely, warm and attractive girl” in the Kilmacthomas post office, who had offered he and his fellow travellers refreshments. In an etching of the scene, the young woman, seen dressed in the attire of the time beside a cauldron of hot water, is identified as Rosemary’s ancestor, Cecelia Brown.

Brown inherited the solid two-storey building when her father passed away 15 years ago. Besides the comely maiden of yore, her father and generations of family before worked at the post office. Some were postmasters, with Rosemary Brown herself, in her early 20s, taking on the position of postmistress for five years before deciding to move to London to study law and work in finance.

The building ceased to be a post office 10 years ago, when a more modern facility opened nearby. In the years following her father’s death, Brown would come home to visit from her London base.

“I didn’t want to part with it, I really didn’t. But it came to the stage where either work needed to be done or it would have to be sold.”

Two years ago, Brown decided to renovate the house and work on the adjoining coach yard. The work is ongoing, but happy with the level of progress, she is now in a position to recoup some of the investment by letting it on Airbnb.

“The house is very presentable now, which is a blessing. I’ve had wonderful support from the locals, many people just helping in so many ways. Everyone has rowed in – from some of the local builders, to the two energetic young men who run the Coach House cafe, to the butcher’s across the road, to the Kierseys and other families around who have been really helpful.”

Co-ordinating the project from London was a challenge, helped by the hiring of an architect and builder, locally. Brown would travel back and forth to meetAlan Murphy, the builder on the project whom she describes as “a wonderful man”.

Miraculously, she says, in the middle of it all the Greenway opened and the village flourished, which opened the options in terms of tourist lettings. She spent a lot of time trying to decide how to decorate the house, and came down on the side of keeping its character, and much of its furniture, books and other family mementos.

It was, she says “quite painful to get rid of stuff”. With generations having lived in the house there was vast amounts of papers, books and other artefacts. Going through boxes of the personal material is a long-term project that Brown will take on over time. Letters from an uncle who lived in the early 1900s particularly caught her eye.

“They’re letters of the time, dated from 1917 and beyond. He talks a lot about local people, history, what was news at the time including, of course the missing postman story. I’ve only managed to transcribe a little so far, the rest is another day’s work, but that needs to be done.”

What was not discarded or sent to charity was put into storage while the bulk of the renovation work got under way. First up was to tackle the intrinsic stuff and get that just right – the roofing, flooring, lights, heating, insulation etc. Maintaining the windows and holding on to the character of the house as much as possible was a priority.

She hasn’t changed things radically, she says, “except to put more bathrooms in and a decent kitchen”.

Downstairs there is a parlour, a diningroom, a toilet and kitchen. Upstairs there is a bathroom and four bedrooms with another in the separate studio. Brown has held on to a lot of original furniture, a clock which was in the post office, her grandmother’s piano and other treasured pieces which have been in the house for generations. A charming collection of china holds a particular soft spot for Brown. It’s not, she says, because of any monetary value, but a lot of it was her mother’s.

For a house that has been so recently refurbished it very much maintains a sense of its origins, with modern touches subtly blended with more traditional. Cash wasn’t limitless, so Brown reused existing furniture as much as possible and picked up accessories in the sales in London.

“You could spend anything on these things, but I just didn’t have the money. I wanted it to be very personal though. The things that I value more so than anything are the books and the china and the other old items that I’m fond of. My mother collected a lot of things at auctions. She had a bit of taste, but not much money. It all went on education for us five children.”

Although, back in the day, Oliver Cromwell might beg to differ, the village is known for its friendly welcomes. Cromwell’s damp sojourn there had more to do with the weather than hospitality, as the flooding river forced the unwelcome visitors to camp out in higher fields when they couldn’t cross the full waters. Daniel O’Connell’s later reception was more than enthusiastic despite, as he said “the village being in the hands of the Beresfords”.

Nowadays welcomes are fulsome and less complicated. Brown has been, she says, incredibly moved by the welcome and support she has received after living abroad for so many years.

“The Greenway has had a huge impact here. Everyone is so energised in this village about what it has to offer. So my work has been a bit of a statement, welcoming people to come and share this experience.”

Having left London after her job in finance came to an end last year in the midst of Brexit-related pressures, Brown is working in Dublin on a short-term contract. With her other house in London now let and uncertainty about what she would like to do with her future, Brown is keeping her options open. She has divided the house into a four-bed and separate studio, allowing herself a range of options around letting for parts of the year.

Beside the house there’s an old farm yard with sheds that Brown would like to tackle as part of her ongoing plans to restore the entire property. At the moment though, the plan is to take some breathing space and consider what to do next.

“I’ve let out my home in London. My contract in Dublin will end in May. After that we’ll see. But the old post office causes me more excitement and pleasure than anything else.”

Have you recently extended or renovated your home? Or built a new house from scratch? We’d love to hear how you got on. Please email homeanddesign@irishtimes.com