Coach house conversion in Shankill for €795,000 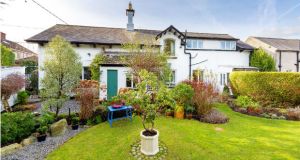 A converted coach house hidden away at the end of a cul-de-sac off Corbawn Lane in Shankill, Dublin 18, has been upgraded several times since Michael and Pamela Hill bought it 39 years ago – but they are quick to say that new owners will likely revamp and extend it to suit modern tastes.

Pine Lodge was originally the coach house of Eaton Brae, the large Victorian property built about 1857 next door. Converted in 1969, Pine Lodge was bought by the Hills in 1980. They put in new heating, double-glazed windows, all new pipework and new bathrooms over the years but think new owners will likely want to create more open-plan living space, especially around the kitchen area.

Eaton Brae House, the three-storey semi-derelict listed building next door, is soon to get its own makeover: planning permission has been granted for it to be converted to two apartments next to 14 houses to be built in its grounds. The Hills emphasise this is not why they are moving: the new houses will be built behind the high wall that separates Pine Lodge from Eaton Brae, and will not overlook their home they say. They are downsizing and have already started the arduous task of decluttering: a shelved shed outside is lined with neatly labelled boxes.

The detached 196sq m (2,115sq ft) property is for sale through Hunters seeking €795,000. It’s a short walk from the sea at the bottom of Corbawn Lane, and three minutes to Shankill Dart station – there’s a shortcut near the bridge over the railway line.

The four-bed sits across a wide site, with a large drawingroom on the right of the front hall furnished like many other rooms with period furnishings – some of them from Michael’s original home. He grew up in Florenceville, a large, early 19th century house on nearby Shanganagh Road, when the lands from the sea to the railway line were still farmland.

The dining/sittingroom on the other side of the hall is, like the drawingroom, a bright, comfortable room with a box bay window overlooking the front garden. It opens into the timber-floored kitchen, which runs from the front to the back of the house: it has pretty green-and-white tiled splashbacks and green-painted timber units.

There’s a small porch to the rear opening into the wide back garden. Accommodation downstairs also includes a bathroom with a power shower installed 10 years ago.

Upstairs there are four bedrooms, three smallish doubles and one large one: the main bedroom is directly above the drawingroom below. It is dual aspect, with one floor-to-ceiling window overlooking the side of the house. There’s scope here to build an en suite on the other side of the room. A wide, bright top landing has plenty of room for a desk – it’s used as a study at present – and there’s also a family bathroom.

The wide rear garden is sheltered by a high wall and is prettily laid out in lawn, with mature trees and bushes and a patio by the back wall. It has a high, neatly-trimmed hedge like the one sheltering the gravelled front garden. There’s a garage and room at the rear to park four or five cars, says Michael.