Famine folly may have future attraction 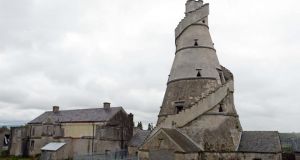 The Wonderful Barn was built in 1743 as a Famine relief project by Katherine Conolly, the widow of William “speaker” Conolly, of Castletown House. Photographs: Eric Luke 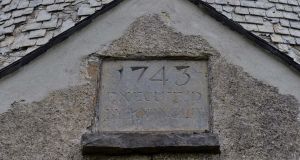 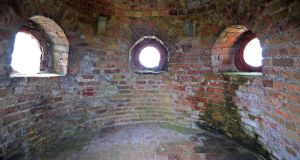 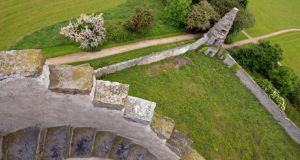 Why is it of interest?

It is deemed to be one of the finest follies in Ireland. The Wonderful Barn was built in 1743 as a Famine relief project by Katherine Conolly, the widow of William “speaker” Conolly, of Castletown House. Based on the design of an Indian rice store, the 70ft-high conical grain store is encircled by a cantilevered staircase with a crow’s nest viewing gallery.

The interior has remarkable brick vaulting covered with an outer skin of rubble stone. Although originally positioned at the eastern end of the Castletown Estate to terminate the vista of a tree-lined walkway, it is now separated from the estate by the M4 motorway. The site stands next to a crescent-shaped piece of development land, where a housing project by Albany Homes was abandoned in the noughties.

Kildare County Council acquired the site in 2005 from the developers of the Albany Homes scheme. It was placed on the World Monuments List of 100 Most Endangered Sites in 2006, following nomination by the Irish Georgian Society. Preceding this, the Wonderful Barn, the two conical shaped dove cotes and the adjoining 18th-Century Barnhall House were badly damaged by vandalism.

In recent years, the council has spent more than €180,000 rendering the outside of the Wonderful Barn and repairing the stonework on the cantilevered staircase. “The building was getting worse and we were concerned that it would move beyond a state in which we could restore it easily,” says Peter Minnock, director of services for housing, community and culture at Kildare County Council. The council is in a continuous battle to secure the buildings against vandalism and has successfully established allotments to encourage positive interaction with the site.

The Irish Georgian Society, the Castletown Foundation, the Irish Landmark Trust and the Office of Public Works, which manages Castletown House, have all been involved in seeking a solution for the barn and ancillary buildings. To its credit, Kildare County Council has liaised with all these groups in an effort to find a sustainable future for the entire site. “We need now to build a consensus to protect the building with the limited resources that we have,” says Minnock. Jeanne Meldon of the Castletown Foundation adds: “We hope that whatever use does emerge is compatible with conservation of the Wonderful Barn because it is such a significant building. We would also like to see it open to the public with clear historic information and possibly a physical link back to Castletown Estate.”

Kildare County Council is committed to building a discovery park with the barn as a centrepiece if funding is secured. “We believe the Wonderful Barn Discovery Park has great potential as a local and national tourist attraction in the same way that Airfield in Dundrum and Newbridge House in Donabate have,” says Peter Minnock. “It could be the jewel in the crown of amenities for north Kildare.”

Housing crisis: A British solution to an Irish problem

Don’t hibernate: there’s plenty to do in the January garden
6

Hilary Fannin: What I wish my spouse and I had done the morning of our wedding
8