Building the dream villa in Spain: ‘There’s a tax for every brick you plan to lay’

Finding a plot was the easy part for Ronan McKenna. Then came a long, costly build 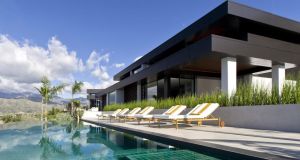 “I think I’m suffering from some form of housebuilding PTSD,” Ronan McKenna exclaims, referring to the toll that building two villas in 18 months on Spain’s Mediterranean coast has taken on him.

McKenna, who is originally from Greystones, in Co Wicklow, is no stranger to the property game. He first stepped on the ladder more than 20 years ago, with a small flat in the English seaside town of Brighton, which he renovated and flipped for a profit. More than 20 property-development projects later, each increasing in size, scale and turnover, McKenna felt assured he was on top of his game. That was until he began to plan and build his dream home in Spain.

Following the death of two close friends, McKenna and his partner, Alun Dufoo, decided they’d had enough of the rat race and sold their home and estate agency in Knightsbridge, in London. After an impromptu visit to a friend in La Herradura, an exclusive spot in Andalusia, on Spain’s southern coast, they fell in love with the breathtaking bay and decided it was where they would put down roots. But finding the right property wasn’t easy.

We found an amazing site with panoramic views of the bay. After much haggling we had ourselves 3,000sq m of Andalusian land to work with

“We tried and failed to negotiate a deal on three villas. This was back in 2013-14, when the bottom had fallen out of the market, and yet all these Spanish guys were looking for crazy money, so we backed off for a while,” McKenna says. “A few years later and we found an amazing site along the side of the mountain, with panoramic views of the bay and rugged landscape. After much haggling with the owner, and eventually agreeing to pay him in cash, we had ourselves 3,000sq m of Andalusian land to work with.”

In 2016 McKenna and Dufoo rented a house locally and began the process of finding an architect and builder to work with on the project.

“This sounds terrible, but we didn’t want an architect with too much vision, more good mechanical aptitude. I grew up around interiors” – his family ran a chain of furniture stores in Ireland – “and our business is property, so we had a very clear image of how we wanted the houses to turn out and didn’t want a third wheel scuppering our concepts,” says McKenna.

For the main house, the one earmarked as their home, the partners planned to create a cutting-edge Los Angeles-style house, with lots of glazing, seamless floorplans, high-end finishes and enough gadgets to keep James Bond happy. The secondary house – which at 3,500sq ft is about four times the size of an average three-bedroom semi – was planned to accommodate surplus family and guests, and act as a rental source during the high season. Here the look was to be breezy and cool with a Ralph Lauren beach house vibe.

“I had every last design detail planned to a tee, but it turned out we really needed a good architect in the end. Not only do neither of us speak Spanish, but trying to get planning and building licences in Spain is quite difficult – some days it felt like we were stepping into a movie, and that it was all about who you know in the building trade and in the town. Fortunately, our architect was well connected and introduced us to the local politicians, and we even had a meeting with the mayor. Ultimately, they were all very helpful, but they know you are going to bring a lot of revenue to the area. They have taxes for every brick you plan to lay. People always ask is it cheaper to build out here, but any savings you make on labour or material costs of building in Spain, you lose it on the all the licence fees,” says McKenna.

Once they had the green light from the authorities, the building work was put out to tender and was cleverly issued out in two contracts. The first contract was for all of the earthworks: excavations, levelling, drainage, installing services and laying foundations.

“We commissioned a more general building contractor to do this part – the dirty work per se. For phase two, the actual building of the houses, pools and gardens, we needed a contractor who had more finesse and who had a solid work history and reputation, as you need recourse in Spain. We went with a commercial builder, who had a history of building high-end shopping centres and whose team spoke good English, which is imperative,” says McKenna.

“Even still, we were on top of them every day, literally, standing over them taking notes and photos, and Alun kept a detailed building log of progress, which came in handy as much got lost in translation. Fortunately, we built a clause in the contract saying we would have the final say on all finishes and if it wasn’t up to scratch they would have to replace it or compensate us. That clause was our saving grace, as the standard of finishes in Spain is not what we are used to in Ireland or the UK. And when you are building at this level, every last detail matters, so let’s just say there was a lot of retrospective finishing,” says McKenna.

Another issue they came up against was the Spanish working calendar. “There’s almost a bank holiday every second weekend, some of which is a Monday and a Tuesday, then there are the very long lunch breaks – some still do the Siesta thing, and the entire workforce of Spain downs tools in late summer. We’d been warned about this so had a penalty clause of €300 per day delay built into the contract and that definitely helped us get over the finish line,” believes McKenna.

Despite all the hurdles, the two villas reached completion six weeks ago. The larger five-bedroom villa, called Flecha Negra, spans 5,500sq ft (including terraces) and clings to the cliff over three tiered levels. The upper floors are dominated by sleek bedroom suites featuring black marble bathrooms, private terraces and endless views across the Mediterranean and mountains. The open-plan kitchen, living and dining areas, adorned with black microcrete walls, contemporary art, mid-century inspired furnishing and a kitchen fit for a professional chef, all open out onto large terraces surrounded by tropical gardens which boast fruit and olive orchards, herb gardens and an emerald green infinity pool.

The four-bed guest villa next door also staggers down the cliff face over three levels and boasts an infinity pool, massive terraces and amazing views. The clean white, glass and cedarwood vibe is slightly less Hollywood movie producer than next door – perhaps a little more lead actress – but both properties definitely have the wow factor.

When McKenna and Dufoo moved in, their first thoughts were, “Wow, it’s so fancy and big we’re not sure we actually want to live here now – it was all a bit overwhelming. But we are settling into the space slowly and trying to figure out if we might sell the smaller villa, and take on another build, or maybe rent both during high season.”

“We are still trying to find our feet,” says McKenna. No doubt if they just dip them into the emerald green infinity pool just a few more times, they’ll find their footing.