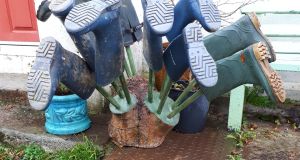 More than a decade ago I made my first “Welly Tree”. Consisting of broom handles stuck into a lump of wood, it was a convenient way of storing muddy boots. More recently I made another, better crafted one and my wife called it “a piece of crap”.

Apparently she much preferred the earlier version, which had long been decaying into gradual decrepitude and got eventually dispatched last summer. My wife can be very harsh sometimes . . . and ungrateful.

I had consciously fashioned the offending “crap” to appeal to her aesthetic eye and, to my mind, as an ornamental feature, it was far superior to the merely utilitarian hulk that preceded it.

When we first moved to the country, muddy boots quickly became a quotidian but vexing problem. Though our field was large, the cottage was small. We got used to cursing daily as we tripped over the perpetual pile of dirty wellies inside the front door. Then I stumbled on an ecological solution. In our dozen years here we’ve planted about that many trees in compensation for the first and only one we ever actually felled.

It was a gargantuan, gloomy Lelandii which robbed the sitting room of afternoon light, and once it was down it provided firewood for a year and a half. I sawed and chopped as required until I reduced it to a lump of a stump too big to cut.

Exhaustion is the mother of invention and inspiration struck. I rolled the barrel-sized trunk to the front of the house, levered it upright and levelled it off with the chainsaw, then drilled some holes and glued in lengths of dowelling to create a sort of punk porcupine effect. It was squat, unlovely and crudely fashioned but did its job and for years it was adorned by various boots in ever changing sizes as the boys grew.

However, having knocked it up in haste, inevitably the thing rotted. So, having learned a thing or two, I replaced it with an improved model. Weather-proofing was now clearly required and I was also newly conscious of what the look and feel of the piece should be. I considered my materials, contemplated the balance between form and function, then built something thoroughly practical and pleasingly pretty.

The total visual effect was stunning

Or so I thought. The finished object certainly looked classier. I used a more manageable piece of ash with nice smooth bark as the base. Less bulky and more elegant than its predecessor, it forked into two boughs where I’d cut it. This was an integral part of my design concept which allowed a more organic and branchlike spread of the angled wooden dowelling – especially after I’d coated them with green fence paint.

The total visual effect was stunning. The old welly tree’s glum appearance resembled that of a disgruntled hedgehog. The new one had style – an abundant, natural flair, like a huge, hand-bunched bouquet. It actually looked like a tree.

Constructed in May, it sat out the long, warm months, tucked back into the nook between the front door and the bench with the view across the valley. I nodded appreciatively at it every time I passed.

When wet, wintry weather inexorably returned, I proudly repositioned my work closer to the door and put it into commission. It was flung in at the deep end and laboured harder than its predecessor ever did: both boys are bigger and wear heavier wellies; my wife has a spare pair and I’ve got my ordinary, everyday ones as well as my luxury ones for “best”. The visual impact of the full collection was very satisfying. And even though the prongs at the back were inaccessible, and the wider reach of the whole thing now obscured the view from the bench, I had no doubt I’d upgraded some garden furniture to a piece of sculpture.

Then it blew over. So I righted it and re-hung the wellies with some minor readjustments. I placed the heavier boots centrally to prevent overbalancing. This meant a more ungainly stretch when reaching, in my socks, from inside the door – which wasn’t suave – but art requires sacrifice. Then it blew over again. I righted it again, and reluctantly abandoned symmetry.

I put the smaller, lighter boots on the taller, higher prongs to lower the centre of gravity and then wedged the heavy, clay parsley pot against the trunk for reinforcement. A few mornings later, after only a moderately windy night, I opened the front door to find wellies scattered on the damp ground, the tree nestling sideways on the doorstep and the parsley badly bruised.

So, there’s a piece of ash by the woodpile. Another good idea gone up in smoke.

Philip Judge's In Sight of Yellow Mountain is published by Gill Books.