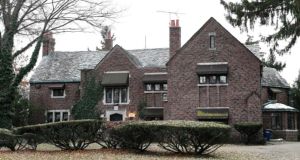 The great soul singer died in her Detroit riverfront apartment in August, from pancreatic cancer, at the age of 76. She sold more than 75 million records and won 18 Grammy awards. She had been in poor health since 2010.

A representative for the Franklin estate, Sabrina Garrett-Owens, said “no other Detroit properties” were owned by the Queen of Soul. In September, it was revealed that Franklin died without a will, meaning the process of dividing up her wealth is likely to play out in public.

Those who paid tribute to Franklin following her death included the former presidents Bill Clinton and Barack Obama and the current president, Donald Trump. Clinton, at whose 1993 inauguration gala Franklin performed, said in a joint statement with his wife, Hillary Clinton: “She will forever be the Queen of Soul and so much more to all who knew her personally and through her music. Our hearts go out to her family and her countless fans.” – Guardian

Living here: Still a welcome in the parlour
10