Adam’s History Sale moves away from the 1916 commemorations

Auction to include a tale of two continents, three wives and a prison door lock 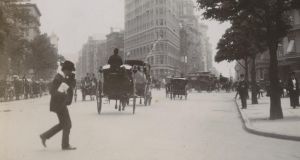 A 19th-century photograph of New York’s flatiron building, part of an album called “An American Journey” 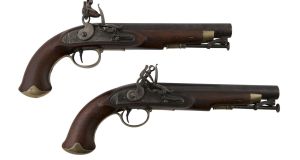 A pair of Irish George III flintlock cavalry pistols by Rigby, estimated at €3,000 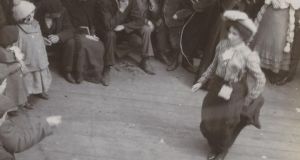 Dancing aboard an immigrant ship, part of an album of 19th-century New York photos 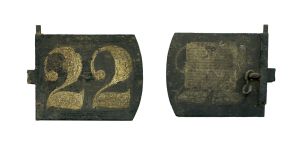 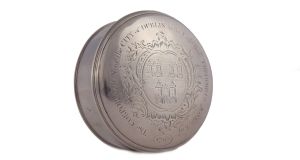 The Adam’s 2017 History Sale on April 27th offers something of a change from the 1916 and Independence memorabilia that featured so strongly over the past year.

The more eclectic offerings to go under the hammer in its St Stephen’s Green salesrooms on April 25th will feature the Newgate Prison lock plate from the cell of Sir Charles Gavan Duffy (1816-1903), founder of The Nation, estimated at €600.

At the more recent end of the historical scale is an “escaped” prototype for the Irish 20 pence piece, dated 1985. The 20p was not introduced generally until 1986 and was the first Irish decimal coin to differ in size to the corresponding British coin. It is estimated at €4,000.

Something which may attract good interest because of its age and rarity is a lot comprising three penannular solid gold rings, or Bronze Age Irish gold ring-money. In early medieval Ireland, the legal structure followed a system based on reparation, which usually involved payment by the perpetrator to the victim and their family.

The rings were popular as high-quality reparation payments, but sightings are now rare. They will be offered with an estimate of €1,500; keen interest is expected.

Also from Irish medieval times and within the walls of Dublin is a section of an oak drain with an iron collar, originally from High Street, which ran parallel to the Liffey, from Cornmarket to Christ Church. Oak was a common material used for water pipes as it was readily available and cheap, but its durability varied greatly depending on the quality, its saturation and the soil conditions it was exposed to.

The lifespan of oak pipes varied greatly, but some examples, such as this one, are well preserved. The 97cm-long piece of old Dublin infrastructure is estimated at €600.

Those with deeper pockets may be interested in a George III silver Freedom Box, made by Dublin silversmith Bartholomew Stokes, and estimated at €10,000. James O’Halloran of Adam’s said the box is beautifully engraved with the coat of arms of the City of Dublin and inscribed to the Right Hon Theophilius Jones Esq 1767.

Jones was a member of the wealthy Leitrim family based at Headfort. The family, originally from Wales, received a grant of lands from James I in 1622. Theophilius (1729-1811) was presented with this special box in 1767 to mark his tenure as privy counsellor of Ireland. His successful career included posts as collector of excise at Dublin Port; secretary to August Hervey, chief Secretary of Ireland; and an MP for Co Leitrim.

A couple of lots of late Georgian firearms by Irish gunsmiths WJ Rigby are also on offer, including one with a flintlock carbine, which bears west Cork marks and was issued to the RIC in about 1818. It is estimated at €2,000. Also by Rigby, which, incidentally, is the oldest firm of gunsmiths in continuous production in the world, is a pair of George III flintlock cavalry pistols, with decorative Damascus barrels and which also have west Cork marks. These are estimated at €3,000.

Followers of 19th-century Irish history are sure to be interested in the Charles Gavan Duffy artefact. The plate from the lock on his former prison cell was acquired by the man himself prior to the demolition of the prison cell in 1893.

Perhaps more ardent in his three marriages than his nationalism, Duffy was arrested on July 8th, 1848 for sedition. Unlike others, he was not transported to Australia. Released, he became disillusioned with Irish politics and emigrated to Australia where he became prime minister of Victoria in 1871. He was knighted in 1873, retired to France in 1880 and married for the third time in 1881. He died at Nice in the south of France in 1903 at the age of 86.

The story of the 20 pence piece is equally colourful. The coin, which has a yellow-brass colour, was introduced to general circulation on October 30th, 1986, but was issued to various companies and organisations in advance. The purpose was to test the weight of the coin in order to calibrate devices such as vending machines, telephone boxes or meters.

Following testing, these coins were returned to the Central Bank. However, some escaped being melted down and are now in private hands. About 450 of the 500 coins were destroyed, leaving about 50 of what Adam’s describes as “escapees”. They are highly sought after and this example is estimated at €4,000.

The sale will also include a very rare, possibly unique, photograph, which shows about 40 uniformed British soldiers in front of a Cork College building circa 1921. The officer in the centre of the front row is Bernard Law Montgomery, later the victor of Alamein, then brigade major of the 17th Infantry Brigade serving in Cork. This carries an estimate of €500.

An album of late 19th-century photographs of “An American Journey” includes images of New York landmarks and a ferry journey (€ 300-€500).

People still seeking 1916 memorabilia may be interested in a copy of the 1916 Proclamation, estimated at about €150,000.