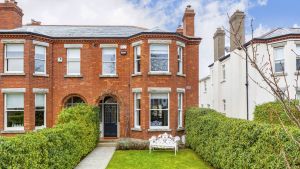 A beach at the end of the road and a home office at the end of the garden are two features that would rank high on the wishlist for many Dublin househunters with substantial budgets at the best of times. Adding in a daily walk by the sea is as good as it gets and working from home is a Covid-era norm.

St John’s Road links Strand Road with Park Avenue in Sandymount, one side mostly grand two-over-basement homes, the other a terrace of later Victorian two-storey houses.

Number 17 is an end-of-terrace, bay-windowed redbrick that has been extended and modernised by its current owners who bought in 2013. Once planning had been secured for their ambitious plans, which included a contemporary two-storey extension to the rear and the conversion of the garage into a home office, they moved in before Christmas 2015. The build took nine months.

The couple had been househunting in Sandymount for five years – it’s an area where supply is always on the low side; people move in and stay – before finding number17, then in need of a serious upgrade. What made the project painless – not something you often hear after a period house renovation – was, according to the owner, finding local builder Declan Darcy, and Joan McElligott who was at A2 architects.

The key decision in the new ground-floor layout was the location of the kitchen which they have placed in the centre of the house in what was the rear reception room. It opens into the rear extension which made space for a large dining area and a small family room in the distinctive-looking new double-height space finished in exposed brick, white painted ceiling beams and with a large light well.

“I wanted to use every inch of the house, and putting the kitchen in the centre of the ground floor means there’s no spending all the time at the back of the house and never in the front; we use all the space,” says the owner, admitting also that part of the thinking in 2013 was that she imagined the layout would be ideal for dinner parties. Now, three children later, she laughs at the very thought.

Cabinetmaker Cillian Johnston was brought in to design and make the kitchen – painted timber with quartz tops – and brought back to complete bespoke units for the hall, bedrooms and home office.

As they were moving from an apartment, they were open to advice from family as to what they might need in a large house. A sister-in-law suggested that the utility room with washer-dryer is best upstairs – less hauling laundry up and down stairs – while a brother urged the couple to include the attic conversion in the works, on the grounds that getting it done later is too disruptive.

The two-storey extension gave the home the fourth bedroom they were looking for and the house is now 200sq m. During the renovation many original features were restored while others were replaced. There are, for example, new sash windows and new oak floors.

The couple now hope to move on in the area and are selling 17 St John’s Road, though Sherry FitzGerald seeking €1.45 million.