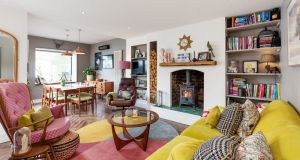 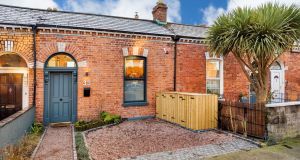 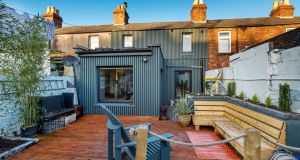 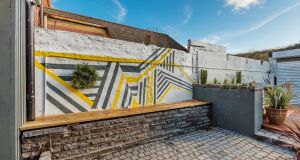 The villa-style redbrick cottages lining the Ballybough end of Clonliffe Road back onto the train-line embankment to the rear. Overlooked only by passing commuters the homes have south-facing rear yards, some even have valuable vehicular rear access.

One such property is number 33 which its owners bought in August 2019 for €282,000, according to the property price register. It was sold as a three-bedroom property.

The redbrick façade had been painted a burgundy red and one of the first things the new owners did was return the brick to its original russet colour. A poultice-like product called ‘Strip Away’ was applied to the exterior to gently remove the paint and the brickwork repaired and sealed afterwards.

Its layout then was two bedrooms upstairs with the third in what was originally the living room, to the right of the hall at the front. The new owners reconfigured the flow, turning one of the bedrooms upstairs into the family bathroom with the main bedroom to the front, where it enjoys a ceiling height of almost 3 metres.

The rear was reimagined too, with the bathroom downstairs moved to accommodate a smart kitchen, painted a pale dove grey with units from The Panelling Centre. Its new location gets lots of warm southern light, which bounces off every surface, including the tiled floor, set out in a herringbone pattern.

Central to the space is a kitchen island with a waterfall, marble-look finish countertop, which overlooks the living area. The lounge is set around an inglenook fireplace with a stove set into the exposed brick fireplace. Open shelving flanks the chimneybreast and underfoot is an oak-effect parquet, engineered floor, set out in the same pattern as the kitchen.

Off the dining area glass doors open out to a south-facing courtyard where there is vehicular rear access, via an electric roller shutter, onto Trinity Terrace. The back faces the Maynooth line train embankment and, save for the odd distracted commuter, isn’t overlooked.

The main bedroom is to the front of the house, off the encaustic-tiled hall, and has been painted Crimson Pink by Farrow & Ball with one wall picked out in panelling to add texture.

Upstairs the bathroom has a free-standing roll-top bath and separate shower and an encaustic tiled floor featuring a peacock pattern.

Adjoining it is the second bedroom with feature wall and wardrobes painted in Sap, a restful new on-trend green, also from Farrow & Ball.