Designer style in Carrickmines for €1.7m

A Paul Brazil-designed detached house at the end of a quiet avenue off Brennanstown Road is a model of new-build efficiency with a high-spec finish, a geothermal heating system and a B1 BER cert 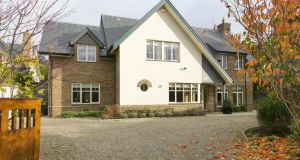 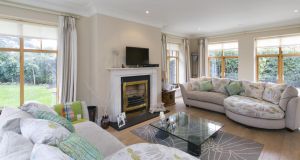 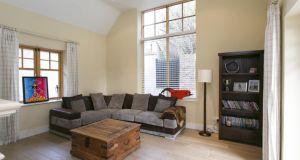 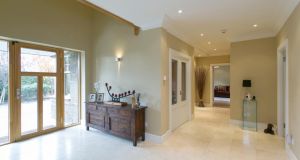 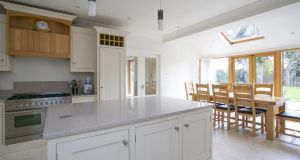 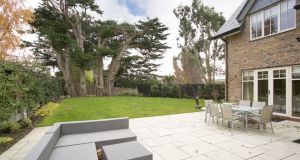 Kilkerrin is a five-bedroom detached house on about one third of an acre in Brennanstown Vale, an upmarket development that is equidistant from the villages of Foxrock and Carrickmines, where plots of land were originally sold to build one-off houses.

The sizeable five-bedroom, four-bathroom house measures 272sq m (2,900sq ft) and was designed by architect Paul Brazil – one of south county Dublin’s go-to architects for contemporary residential refurbishments. He is currently working on a property on Shrewsbury Road.

The house was built in 2007 on one of the few remaining vacant lots in the Vale. The front door opens into an unhoned- limestone-floored hall. Double doors lead through to a formal livingroom that is the width of this part of the house. It has a gas insert in a classic marble fireplace and engineered oak floors.

There is a formal dining room to the front. This room has a Play School-like round window and was used by the last occupant as a playroom for the children, which makes sense as the kitchen is big enough for entertaining.


Geothermal heating
The kitchen has built-in units by Design House, Dalkey, Silstone countertops and a six-burner Britannia range set around a large island.

Off the kitchen is what’s being called the family room which is where the next occupants will probably do most of their living. It is a fine square space with a vaulted ceiling, a gas insert fire and double doors leading outside to the stone patio where Monterey Cyprus trees frame the garden.

Upstairs, there are five bedrooms, two of which have shower en-suite bathrooms. The built-in wardrobes are also by Design House, Dalkey. From the rooms there are views to the Dublin Mountains.

The house has been well finished with high spec Velfac aluminium-clad timber exterior doors and windows throughout. These, along with its core geothermal heating system, concrete floors and underfloor heating, contribute to its B1 Ber rating.

The property was rented out and was achieving a monthly income of €5,000 through Fern Property Consultants. It now has an optimistic price tag of €1.7 million through agents Lisney. Nearby, Jamilah, also a five bedroom house, but considerably bigger, had an asking price of €2.1 million and sold on December 19th for €1.89 million through agents SherryFitzGerald, according to the Property Price Register.

A classic white and one of my favourite reds, each for €11 or less
6