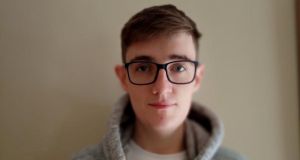 David Williamson started drinking alcohol when he was 13 or 14.

“I used to feel left out and that I never fitted in but a couple of beers made me feel like I had arrived. I could chat to girls and do all these great things,” says the 26-year-old.

There were no major consequences from his drinking until he was in his late teens. “I crossed an imaginary line in that I had to drink more to get the same effect and things got so bad that I became suicidal and ended up in hospital.”

An only child living at home with his parents, Williamson attended a private school in south Dublin, but says he had no interest in school. He failed his Leaving Certificate. “My parents told me I was drinking too much and I tried to control it for a while, went to an Alcoholic Anonymous meeting when I was 19, but, at that time, nobody could really tell me what to do.”

He moved to Donegal to do a training course while staying with an uncle. “It was hell. I was running away from drinking, but I was up and down to Dublin at the weekends and back drinking again.”

A year later, he returned home, got a job as a carer, but his drinking got worse. “For every two pints my friends drank, I drank four and everything started to fall apart. My parents were really concerned.”

He hit a crisis point when after drinking in Temple Bar over Christmas, he fell and woke up in St James’ Hospital with his neck in a brace and without any memory of how he got there. Not long later, he ended up in Tallaght Hospital after another incident. “I was 22 at the time. I rang the Rutland Centre and went in for the five-week course two weeks later. I found it very emotional at the start. I didn’t want to be there but I stayed and have been sober ever since.”

While back working as a carer, Williamson went to AA meetings and opted to do a two-year course to become a pharmaceutical technician. “While I was in college, there was lots of drink and drugs around, but I kept sober. My sobriety has given everything back to me and my parents trust me again. I’m in a relationship for a year now and my girlfriend knows why I don’t drink.”

Working full-time now, Williamson continues to go to two or three AA meetings a week. “I’m often one of the youngest people there. I wish I’d continued going to the meetings when I was 19. All I’d say to people is that if they think they might have an issue with alcohol, ask for help.”

The Rutland Centre Recovery Month is an annual awareness campaign every September to break the stigma associated with addiction and encourage people to seek the support they need to recover. This year, the focus is on people in their 20s and 30s and the specific challenges they face on their journey from addiction to recovery.

“Younger people can find it quite difficult to see a future without the addiction to the behaviour or the substance that has been such a big part of their lives,” says Maebh Mullany, chief executive of Dublin’s Rutland Centre (email info@rutlandcentre.ie or phone 01-494 6358). “They may ask themselves, ‘what will my life be like if I am sober?’ They can find it hard to visualise a career, a family or future relationships and social events such as weddings, for example, can be hugely challenging for them.”

Conor Byrne grew up in Tallaght, Dublin, the eldest of three boys. He too started drinking a few cans of beer at 13 or 14 with a couple of friends.

“That continued for a while but when I was able to buy my own drink, I started drinking more. I met new people in clubs and pubs where if you didn’t have drugs in your pocket, you were the odd one out.” The 25-year-old did his Junior and Leaving Certificates but never saw much point in putting in an effort. “I had no intention of going to college and was just living day to day at home with my family. My dad ran his own business and I worked with him so I was never short of money.”

However, when his drinking and drug use worsened, his father fired him from work. “I was in and out of retail jobs after that. I could never hold down a job for longer than a couple of weeks. I couldn’t focus. I had this image of myself as a fun, happy, outgoing person but I was struggling. When I started taking harder drugs like cocaine, I seemed to need more drugs than my friends.”

In 2016, Byrne says his drug use hit a peak. “I was prescribed painkillers for back pain and dental pain and then I started to take two boxes a day just to get by. My wages were gone before I got it and I had no interest in eating. I was walking around like a ghost.”

His parents said they would pay off his drug debts if he went for treatment so he went to the Rutland Centre in September 2016 for five weeks. “It was tough and I wasn’t in the right headspace for it so I relapsed when I came out. My parents stayed in the Al Anon group and said they couldn’t look after me any more so I ended up staying in friends’ houses and even in the park or A&E at Tallaght Hospital some nights, just to charge my phone.”

One night, after leaving a friend’s house, he sat on a bridge in the park, thinking about ending it all. But one of his friends rang him, picked him up and drove him to a Narcotics Anonymous (NA) meeting in the Rutland Centre. “I realised then that I needed to get my life back together. I was still using but after Christmas 2016, I made contact with the Rutland Centre again and signed up for the 35 days in January 2017.

“I found it really difficult. I had been living on a different planet, taking 40-50 tablets a day and drinking. I fought it for two weeks and they said they’d have to send me home because I wasn’t cooperating. After that, I decided to stay and shut my mouth and listen.”

Following the course in the Rutland Centre, Byrne was advised to do a training course while living in a transition house in Navan, Co Meath. Although a daunting experience, he now says that this time was key to his recovery. “It was the hardest yet the best thing I ever did,” he says. Over the last two years, he has completed level 5 and 7 courses in community drug and alcohol work and is about to start as a full-time student of social policy and sociology at University College Dublin.

“Now, I don’t let things fester. I go to AA and NA meetings a few times a week. As you get further from the chaos, you start to forget how bad things were so the meetings are a reminder not to go back there.

“I even gave up cigarettes last year and started going to the gym. Now, 2½ years later, I’m living independently and going to college. There’s such an advantage coming into recovery when you’re young because you can start afresh.”

Recycling, reusing and reimagining rubbish into clothing and accessories
4

Yotam Ottolenghi: how to turn yesterday’s bread into a feast
7

‘Attitude is everything’: how to feel great in your 60s
8

Are almonds bad for the environment?
10