‘My phone is like an extension of my arm – always available, always nearby’ 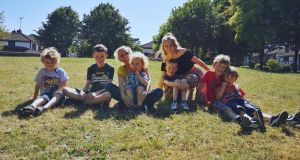 Jen with her children: ‘The laws governing mobile phone usage in our house have remained consistent.’

There have always been very strict rules around mobile phone usage in our house. Well, at least there always have been when it comes to the kids. But I think the adults in our house need to start practising some of what they preach too.

“I’d love to return to a time before mobile phones,” is something my husband can be heard uttering at least once a day – often while he’s mid-scroll and in search of the latest tennis, football, rugby, GAA, two flies running up a wall results etc.

He remains somewhat convinced that he is immune to the lure of technology, but I know he’s under its spell, just like the rest of us.

I, on the other hand, can’t even attempt to deny it. My phone is like an extension of my arm. Always available for a photo opportunity. Always nearby in case of an incoming work call or call from the school informing me that a child has fallen, puked or turned up for an official school photograph in his tracksuit.

And it’s checked frequently, no matter where I am, just in case a work email arrives that needs immediate attention. Which means sometimes I’ll reply from the middle of the supermarket, attempting to appear professional whilst trying to protect my ankles from the trolleys of over-enthusiastic Friday morning shoppers.

I need my phone for work, the nature of which means restricting its usage to certain hours of the day is more challenging than it sounds.

But it impacts on our family life in a way I had never quite anticipated. I feel as if I’m “always on”. Even when the phone is put to the side for the evening, the tell-tale ping of an email arriving can leave me almost on edge until I check what it is – disturbing our family time and inevitably distracting me further as a quick check on Facebook (sure while I’m there) leads to me getting caught up in the world of impressive cake decorating and candle making videos. And then it’s on to Instagram and Twitter because, you know, fear of missing out . . .

“You’re addicted to your phone,” I’ve been told on many an occasion, though usually in fairness, it’s by a stroppy teenager or pre-teen who has had their own phone or device confiscated. The younger children don’t have phones, because although much has changed over the course of my parenting, and rules have been bent and adapted to meet different children’s personalities and needs, the laws governing mobile phone usage in our house have remained consistent.

There are no phones before sixth class and when they arrive on the scene, there are conditions attached. One is that they’ll be checked frequently, not out of nosiness but in an effort to keep my children safe. Another is that there is no social media before secondary school – and even then it fills me with dread.

And the one that has probably caused most objections across the age ranges, but is a non-negotiable – phones must be left downstairs at nighttime. Wailing protests of “that’s not fair” and “everyone else is allowed” are commonplace.

If the endless pings coming from the phones that adorn my mantelpiece at 11 and 12 each night are anything to go by, then it appears there’s more than an element of truth to “everyone else is allowed”. But I am happy for the millionth time to reiterate “different rules in different houses”. And an alarm clock solves the “but I need to wake up early” conundrum.

Of course, teens don’t text or call – so many of the platforms they use are available to them from a much earlier age, via their tablet and iPad access. As the generation who grew up and could leave the world and school behind by closing the front door, it’s hard not to fear the technology we don’t really understand.

The dangers are obvious and yet we feel powerless to stop them. Don’t allow your child have a phone and you risk them being socially excluded at a vulnerable age as meet-ups and outings are arranged over social media. Hand them a phone and Pandora’s box is knowingly opened.

“I’m getting a basket and we’re going to put our phones into them for a period each evening and start living more in the real world again,” I announced to the family over dinner recently. Once the teenage protests died down, the inevitable question/demand came – “you too mum?!”

“Everyone” I insisted, noting a husband smiling, with the contentment of a man who believed this would be no bother. “Some of us don’t even realise the amount of time we waste aimlessly scrolling.”

“It’ll be great,” I continued, ignoring the mild palpitations of panic that had begun at my own suggestion.

Phones Special
- Can mobile phone use cause cancer?
- Medical devices & apps on phones
- ‘An extension of my arm’
- Monitoring my daughter's phone
- Spending months playing video games
- Do you run with your phone?