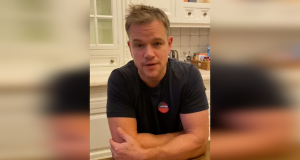 Hollywood Actor Matt Damon has sent a message of support by video to the children, families and staff of Dublin’s Temple Street Hospital.

The Oscar-winning actor acknowledges how tough the past few months have been for those in CHI at Temple Street, and sends his best wishes. In the short video, he says: “Hi to the staff, parents and patients at the Temple Street hospital. This is Matt Damon sending you a big hello. I know these last months have been brutal, but you are incredibly brave to keep going in there to get your treatments. I just want to say I think you guys are amazing - keep it up.”

The actor made headlines last Spring when he quarantined in Dalkey, with even the New York Times reporting on his whereabouts. Spotted several times around the south Dublin village, a photograph of the actor carrying a SuperValu bag went viral (he later said it contained towels for a trip to the beach with his kids).

After returning to the US in May, Damon was back in Ireland in September to film the new Ridley Scott movie, The Last Duel, alongside Jodie Comer and Ben Affleck – using locations that included the historic town of Cahir, Co Tipperary.

I wasted my one and only Matt Damon in Dalkey encounter by thinking grumpy thoughts. 😢 The staff said he is as lovely as everyone says and is always friendly and chatty to them!

And, this week, the Hollywood actor and his wife Luciana Barroso were spotted back on streets of Dalkey.

The video for CHI at Temple Street is not the first Damon has recorded for Irish people over the past few months. In May, he shared a video congratulating the graduation class of sixth-year students in Loreto Abbey, Dalkey.

“We are so thrilled and delighted to get this inspiring message from Matt during this challenging time as we all enter into this phase of restrictions,” said Denise Fitzgerald, chief executive of Children’s Health Foundation Temple Street. “The last eight months have been tough on everyone right across the country but for parents whose children in CHI at Temple Street, some of whom are battling life threatening illness, it has been even harder.”

“As we all get ready to work together to do our part in stopping the spread of the virus for the next six weeks please spare a thought for all of those – staff, parents and patients - in our hospitals who are fighting every day,” said Fitzgerald. “We will continue to work hard to raise funds to support them – every day. Please, if you can help, do what you can to help them. We know times are tough, but we also know that we are a great country for pulling together and our patients need you more than ever now.”