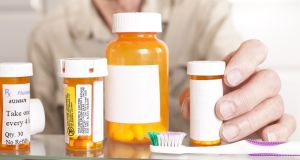 Deprescribing can prompt responses such as: ‘Why shouldn’t I have the same treatment that a younger person would have? You’re just writing me off.’ Photograph: iStock

How would you or a relative feel if a doctor announced that you were on far too much medication and that they were going to have to take you off some tablets you had been happily taking for years?

Would you perceive the withdrawal of medicine to mean the physician is “giving up” on you, or even trying to cut costs at the expense of what’s best for your health?

The questions are legitimate and arise in the context of a practice called deprescribing: a process designed to combat polypharmacy (the prescription of more than five different types of medication to a single patient).

Polypharmacy is a particular issue for older people who have developed a number of chronic diseases throughout their lives. And deprescribing also brings up potentially unsettling discussions around life – limiting illness and limited life expectancy.

Deprescribing can prompt responses such as: “Why shouldn’t I have the same treatment that a younger person would have? You’re just writing me off.”

In the words of one doctor, “There are people who see medication as the barrier between them and the grave.”

For a deprescribing doctor there is the possibility of a person having a critical event or even dying within a short time-frame of stopping a particular medication. Even where it seems unlikely the two events are related it leaves both doctor and relatives feeling uneasy about a possible link.

Patients be reluctant to challenge a drug started by a specialist

According to an editorial in the current online issue of Drugs and Therapeutics Bulletin (DTB), barriers to deprescribing for doctors include the complexity of the issue, time constraints, lack of understanding of prescribing initiated by other clinicians, a hesitancy to discuss life expectancy and anxiety about not following guidelines (which are often written from a ‘silo’ perspective and do not take into account multimorbidity).

From a patient perspective the author says people may worry about changes to their medication, be reluctant to challenge a drug started by a specialist, have concerns about relapsing and fear that they won’t be able to restart their medicines if they need them again.

Speaking at a Royal College of Physicians in Ireland masterclass on prescribing issues in older patients last autumn, consultant physician at Cork University Hospital Dr Paul Gallagher said polypharmacy wasn’t just a case of the number of drugs a patient was taking. The older person’s declining liver and kidney function also played a role in the development of potentially harmful drug interactions.

In a study published in the Journal of the American Geriatrics Society, researchers sought to determine how often doctors deprescribe cardiovascular medications in their practices. Geriatricians were the most likely group of specialists – and cardiologists the least likely – to consider deprescribing in patients who have limited life expectancy, for example where the person has recurrent metastatic cancer or Alzheimer’s.

Despite the many challenges, no one argues against the clear-cut benefits of deprescribing. According to one group of New Zealand researchers, deprescribing is “associated with numerous health benefits including improvement in cognition, a reduction in falls, a decrease in fractures, better medication adherence, and improvement in quality of life”.

In conclusion, the DTB editorial has sound advice: “The starting point for the rationalisation of polypharmacy should be the discussion we have with our patients and their carers so that we can match medicines to their priorities rather than to those of the healthcare system.”

Doctors must be prepared for clinical guidelines being trumped by patient choice using this patient-centred approach, it notes.

“When we see patients do we record in their notes what is important to them, what they enjoy doing and whether their medicines help or hinder their daily activities? And above all, are we brave enough to ask them which medicines they would most like to try stopping and those that they would like to continue? When we routinely ask these questions we will be able to make deprescribing as common as prescribing.”

Róisín Ingle: The resilience of my children has taken my breath away
4

And the winner is... Yes, it’s time for the prestigious Car of the Year award
5

Core blimey: How a 62-year-old man planked for eight hours
8