Thinking of training as a counsellor or therapist?

It’s not enough to be a good listener – becoming qualified to give others advice on how to live their lives takes time, money and commitment 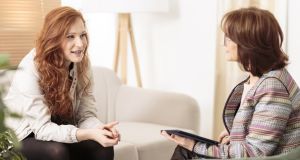 Are you a good listener? Perhaps you’re the person in your group of friends that others turn to when they have a problem or need to vent? If so, then maybe you’ve thought of becoming a counsellor or therapist at some point.

But just what is involved in becoming qualified to administer ‘talk therapy’ and is it enough to be a sympathetic shoulder for others to lean on?

The short answer is no, it’s not.

Getting qualified to give others advice on how to live their lives takes time, money and commitment.

To start with, you have to decide what kind of therapist do you want to be – a counsellor, a therapist, a psychotherapist or a psychiatrist?

“Ultimately, all four of those professions work towards supporting and helping others with mental-health issues,” says Jade Lawless, head of counselling and psychotherapy at PCI College in Dublin and a board member with the Irish Association for Counselling and Psychotherapy (IACP).

“The easiest one to understand is the classic psychiatrist – this person is a doctor with a medical degree as well as specialised qualifications in psychiatry which allows them to focus on mental health from a medical point of view. They may look at things in a similar way to a psychotherapist but they can also prescribe medication.

“Many of them will also be happy to refer patients for talk therapy outside the psychiatric model if they feel that will be beneficial.”

A psychologist, on the other hand, according to Lawless, performs a similar role to the psychiatrist, but their work isn’t necessarily underpinned by the same medical model. While they do traditionally come from a scientific background, there are lots of different branches of psychology out there.

The four main ones are counselling, educational, forensic and clinical, but anyone who describes themselves as a psychologist should have done a three-year degree, a master’s degree and usually a doctorate in their chosen speciality. “Counselling psychologists are the people who most often talk to people about their problems and help them understand and move past them. Educational psychologists usually work with kids to identify learning difficulties such as dyslexia or conditions like autism,” says Lawless. “Forensic psychologists work on challenging behavioural problems in prisons and so on, and finally you have clinical psychologists who are more aligned with the psychiatric model and who work with the diagnoses from the DSM.”

The DSM is the ‘bible’ of mental disorders, a sizable book called the Diagnostic and Statistical Manual of Mental Disorders, currently in its fifth revision. It contains the generally agreed-upon criteria for diagnosing mental-health issues. “It’s an amazing job. There is no other role where you get to be with people and be one of the only or maybe the only person they trust to be vulnerable in front of. Your job is to hold that space and it’s extremely fulfilling,” says Lawless. “Many people don’t have any other outlet in their lives to talk about their feelings. It’s so important that there’s actually something called the ‘dose effect’ in therapy. This describes the fact that no matter what kind of therapy you offer, most people get what they need from the first couple of sessions. That’s down to the relationship.”

Both counsellors and psychotherapists specialise in talk therapy – treatment consists of sitting and talking about the client’s issues and their understanding of how they’ve arisen and why. There’s no medical diagnoses and no medication – it’s just talking and listening in a supportive environment.

“There is quite a bit of disagreement in the field as to what constitutes the differences between a counsellor and a psychotherapist or psychologist. The main thing, though, is you absolutely need a qualification to give advice to the general public,” says Ian O’Grady, president of the Psychological Society of Ireland. “Counselling historically was a bit more supportive rather than in-depth or exploratory, although the lines have blurred over the years. Overall, though, you need to have a good analytical mind and the capacity to carry out research to make a good therapist.”

To qualify as a counsellor or psychotherapist takes at least seven years, with additional time required for accreditation by a governing body. The usual route is a three-year university degree followed by a masters degree, followed by a doctorate degree.

But that’s not where it ends. For example, if you want to become accredited with the IACP, which is the largest accrediting body in Ireland, then you have to do an additional 450 hours of supervised client work on top of your academic qualifications. “Most people take between two and five years to complete that, so seven years to qualify and be accredited would actually be very fast,” says O’Grady.

“You need to be able to assess people and their problems, figure out how to get to the bottom of their issues and assess whether the therapy you’re giving is working. It’s not enough for the client to say they feel better, you need to be able to tell if your work has improved function, lessened anxiety and improved quality of life.

“You need to be able to work with evidence-based therapies, where big research studies have been done to prove their effectiveness.”

‘We have kids who can’t touch their toes’
7