Tummy troubles: how to beat the bloat

Being bloated means that something is wrong, so what should you do? 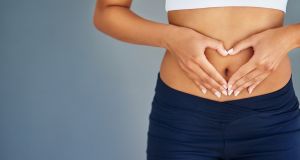 Our digestive system is a complex and mysterious place, home to about 100 trillion bacteria. Photograph: Getty Images/iStockphoto

There are few feelings worse than being bloated. Most of us know that feeling; the expanding pressure in the abdomen, being choked by your waistband.

However, if you’re plagued by stomach pain regularly and have accepted that this is how you’re supposed to feel, think again. Being bloated means that something is wrong.

Our digestive system is a complex and mysterious place, home to about 100 trillion bacteria. If you could remove all of the bacteria in one person’s digestive system, the whole lot would probably weigh about 1 kg.

With all that bacteria and the range of different foods and chemicals we ingest added to the mix, it’s hardly surprising that things can get out of balance in the gut.

Registered dietitian Ellen Roche, who works at the Nutri Vive clinic in Kilkenny, says a number of different factors, from food, to lifestyle and stress levels, can play a role in a bloated and “sensitive” gut.

Nutritional therapist Maev Creaven agrees and suggests far too many people put up with gut issues without seeking a solution. “Sometimes a bug upsets your gut and you need a bit of support to get back to good health, other times it’s an ongoing gut problem that can be resolved but is never addressed properly, leaving many people living with very uncomfortable symptoms,” says Creaven.

“We are all guilty of overindulging in certain foods and eating big portions and it’s an assault on our digestive system which can cause rapid distension of our gut after eating,” according to Roche

You can alter your gut bacteria for better or worse in a matter of days through the lifestyle choices you make, Roche suggests.

First off, she advises a trip to the GP if you have ongoing digestive symptoms that are not resolving themselves. “It’s important to rule out coeliac disease, you can be checked for inflammation with a blood test and make sure there is no blood in your stool. Some patients may have to have an exploratory scope where a camera is used to check out your digestive system.”

If you’re given the all-clear from the doctor but still suffering with bloating, it’s time to look at other behaviours, says Roche who specialises in digestive health including the Fodmaps diet, which has a beneficial effect on IBS.

“There’s a bunch of very straightforward behaviours that can be looked at first. Are you eating three regularly spaced meals each day? Are you chewing gum constantly? You swallow air when you do this, which can lead to gas retention and you may suffer the same problem if you drink throughout the day with a straw,” Roche says.

“Many people are also sensitive to the sweetener in gum which can cause excess wind. Do you chew your food well, eating slowing and mindfully or are you eating on the go all the time?”

When you rule out those issues, then you may be suffering from irritable bowel syndrome, which affects 10-15 per cent of the Irish population.

A functional gut disorder, where a small part of your intestine can be affected, can be caused by a few common culprits, says Roche, including the use of antibiotics which can cause disruption in the amount and balance of the bacteria in your digestive tract, or gastroenteritis or a similar bug caught while travelling abroad and can even be triggered by stress.

Getting back to good gut health can take a bit of detective work, says Creaven. A diary to track foods eaten and symptoms triggered is often the first port of call because you can build a clear picture, very quickly, on what sets your gut problems off.

She suggests the 5R protocol to help restore gut flora and get your stomach working properly again. “In my opinion, the root cause of a lot of gut problems is dysbiosis, an imbalance in your gut flora often caused by too few beneficial bacteria and I would use a mix of functional and integrated medicine and nutritional therapy to restore good health.”

If you’re stuck with ongoing gut problems, the 5R protocol suggests you remove, replace, reinoculate, repair and rebalance. Creaven advises: “You remove any trigger foods, replace with nutrient-dense foods, reinoculate with ‘good’ bacteria, repair your gut lining and rebalance with better lifestyle choices such as reducing stress. The gut-brain connection is something to keep an eye on as it has a big effect on your gastrointestinal tract.”

Getting your gut back on track can be kick-started by a course of probiotics.

Roche suggests a 30-day course which can help repopulate your intestines with the bacteria they need to maintain a healthy digestive process, eliminating the cause of any bloating.

Roche recommends three to her clients: Alflorex, Activia and Vivomixx. It can be trial and error to find which one works best for you, she says.

And there are some new kids on the block if you’re looking to boost your gut’s good bacteria. Fermented foods such as kefir, sauerkraut, soy sauce, kimchi and kombucha contain many different types of bacteria with

The BBC TV series, Trust Me, I’m A Doctor, recently looked at whether the microbes in probiotics can survive the perilous journey through the strong acid in our stomachs and compete with the families of bacteria already living there.

They gave the thumbs up to kefir; volunteers who drank the fermented drink every day exhibited the biggest change in gut bacteria with a rise in lactobacillales, thought to be good for general gut health and are known to help certain conditions including travellers’ diarrhoea and lactose intolerance.

Nutritional therapist Niamh Burke, who runs a 21-day Kefir programme, says the probiotic effect of the natural drink can dampen down the inflammation in the gut and support digestion. “Drinking Kefir can help people digest dairy and starches better, it increases gut motility and it has even been shown to reduce stress hormones in the body. It really helps reduce bloating.’

For many people, adopting a range of approaches and monitoring your progress is likely to get the best results.

Registered dietitian Ellen Roche is a member of the Irish Nutrition and Dietetic Institute, you can get a list of members here www.indi.ie. You can find Maev Creaven and Niamh Burke at nutritioncentre.ie and niamhburkenutrition.com.