Competitors line up on the banks of the lovely Lee 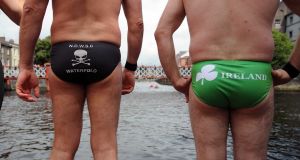 “From the rivers to the sea” might well be the catch-cry of Dublin Swimming Club member Christine Mahoney who, this weekend, will become one of only a handful of people to participate in all 14 Vibes and Scribes Lee Swims when she heads south to take part in the Cork race.

A native of Thurles in Co Tipperary, Mahoney, who now lives in Naas, Co Kildare, first learned to swim in the Suir, but it was when she moved to Dublin and began living near Killiney with her young family that she developed a real passion for the sport.

“We didn’t have any pool in Thurles back then or any instruction so I used to cycle down to the Suir and I taught myself and so you can imagine how bad I was -- it was only when my children were younger that I decided I had to go back and take classes and I progressed to swimming in a few galas.

“And then I started swimming in the sea – I used to get out to Killiney a lot and I’ve never stopped. My first sea swim was such a personal achievement – I did my first open sea swim over 20 years ago from Blackrock to Seapoint and I came last and got the biggest clap,” she says with a smile.

Christine went on to do her swimming exams and now the grandmother of eight is a qualified teacher as well as lady captain of Dublin Swimming Club and she regularly participates in the annual Liffey Swim from Watling Street Bridge to the Customs House in Dublin.

But she has a particular grá for the Lee Swim, competing there for the first time in 2005 when, as part of Cork’s Year of Culture, it was revived by the Cork Masters Swimming Club after a long absence when Vibes and Scribes bookshop owner and swimmer, Joan Lucey, began sponsoring it.

“I’ve a good lot of different coloured medals – I think I have won gold, silver and bronze over the years, but, really, it’s not about the medals, it’s about meeting people and the atmosphere is fantastic at both the start and the finish near the Boardwalk on Lapp’s Quay outside the Clarion Hotel.”

So, as one of only a few people to compete annually in both the Liffey and Lee Swims, how does the Cork event – where participants swim from St Vincent’s Bridge down the North Channel of the Lee and swim up some 200 metres of the South Channel – compare with its Dublin counterpart?

“I love the Lee Swim. The river seems a bit wider and it seems a longer swim because you are against the current for the last 200 metres and I just love the challenge of that last bit -in the Liffey, you have the current all the way so it’s usually a fast swim but the Lee is a more challenging swim.

This year’s Lee Swim takes place at 5.30pm on Saturday, June 30th from St Vincent’s Bridge to Lapp’s Quay, when 500 swimmers, ranging in age from 12 to 74 and coming from 12 different countries, will compete in 22 different categories.

‘Did I miss anything?’ A modern Rip Van Winkle emerges, blinking, into lockdown
4