Six out of every 10 human infections spread by animals 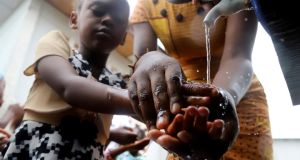 A child has her hands washed as a preventive measure against ebola in Mbandaka, Democratic Republic of Congo. Photograph: Reuters/Kenny Katombe

The deadly haemorrhagic virus is back. Dozens of cases of ebola have been reported in the Democratic Republic of Congo since an outbreak began earlier this month. Some 26 people have died, emphasising once again what a dangerous disease it is.

More than 11,300 people died in an earlier outbreak affecting a number of west African states in 2014-16. A vaccine has been developed since, leading the World Health Organisation (WHO) to express optimism that the latest outbreak can be contained.

Fruit bats are thought to be the main host of ebola

But ebola has already spread from rural areas to the northwestern city of Mbandaka, a major transport hub on the river Congo. Once it penetrates urban areas, where people and animals share tight living quarters, the opportunity for disease transmission rises.

An estimated six in 10 human infections are spread by animals. In the case of ebola, fruit bats are thought to be the main host of the disease, but it is also introduced into the human population through close contact with the blood and other bodily fluids of a variety of infected animals – including chimpanzees, gorillas, monkeys and antelope.

Zoonosis is the scientific name for disease passed from animals to humans. Rabies is an archetypal zoonosis. As with ebola, it’s a virus whose name alone has the potential to cause fear. In areas that still have rabies, people are infected when they are bitten by an affected dog. Rabies virus attacks the brain and is fatal once symptoms develop. It has been eradicated in western Europe by vaccinating dogs and other wild carnivores.

Some zoonotic infections are common in pets but cause mild disease in humans. Ringworm is a good example. Something of a misnomer, it is not a worm but a microscopic fungus, closely related to the bug that causes athlete’s foot in people. In its classical form pets with ringworm usually have circular areas of hair loss. In humans the affected area of skin becomes scaly, flaky and itchy but is easily treated.

As with most infections, zoonoses have a greater potential to do harm in people whose immune systems are compromised, such as older people, those suffering from immunosuppressive diseases (such as HIV/AIDS), and people who are undergoing chemotherapy (which suppresses the immune system).

All pets pose a theoretical risk of zoonosis, with bites, scratches, saliva and contact with faeces among the common routes of infection, while psittacosis (parrot fever) is contracted when humans breathe in aerosolised droplets containing secretions from infected birds.

But the most common zoonotic diseases come from parasites and bacteria that are transmitted through the gastrointestinal route: by touching the pet and then your mouth.

Toxoplasmosis is one of the most common gastrointestinal zoonoses. Caused by the single-celled parasite toxoplasma gondii, the parasite undergoes sexual reproduction in cats and is excreted in faeces. Accidentally swallowing the parasite when cleaning a litter tray leads to human infection.

Most people who become infected with toxoplasma by the parasite are unaware of it. Those who do become ill from it may experience flu-like symptoms such as swollen lymph glands or muscle aches that last for at least a month.

In severe cases toxoplasmosis can cause damage to the eyes, brain and other organs, though such complications usually only arise in people with weakened immune systems. However, in women infected during the first three months of pregnancy the parasite can cause congenital abnormalities.

But pets are good for health too. Finnish research found babies who grew up in homes with a pet dog or cat were 44 per cent less likely to develop an ear infection and 29 per cent less likely to receive antibiotics in their first year of life. Separate research has linked pets with a lower risk of allergies among babies and improved mental health in adults.

And we are fortunate not to live in an ebola endemic part of the world.

How do I convince my wife that I’d be a great stay-at-home dad?
3