The medical solutions for women living with female genital mutilation

Demand for reconstructive operations is growing, but more research is needed 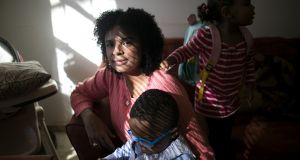 Saffiatu Sillah, whose circumcision caused her agonising pain during the births of her children, Mijan and Jaria, at home in Philadelphia. Photograph: Maddie McGarvey/ The New York Times

She called it her “deepest, darkest secret”, one she had never even shared with her husband. When Saffiatu Sillah was growing up in the West African nation of Sierra Leone, her clitoris was cut off in a ritual circumcision.

She was left with scar tissue that caused pain during sex and agony during childbirth. After her second child was born, Sillah, a pharmacist, searched for medical help. Dr Ivona Percec, a plastic surgeon at the University of Pennsylvania, said she thought an operation could ease the pain, but might fail to uncover any remnant of the clitoris beneath the scarring.

“There might not be anything left,” Dr Percec cautioned. But she was willing to try. “It’s like digging for buried treasure. Everyone thinks it’s just the little triangle that protrudes. That’s just the tip of it.”

More than 200 million women and girls alive today have undergone genital cutting (known as female genital mutilation) in 30 countries in Africa, the Middle East and Asia, ranging from nicks to extreme damage. Yet, despite the extraordinary need for appropriate medical care, there has been little rigorous research on how surgeons can relieve enduring physical harm or improve sexual sensation.

“They come to us seeking solutions that will optimise their health – both physical and psychosexual,” said Dr Nawal M Nour, an obstetrician-gynaecologist who directs the African Women’s Health Center at Brigham and Women’s Hospital in Boston. “Presently, we are failing them because we lack the research that can guarantee their best outcome.”

With Sillah’s operation in 2016, Dr Percec joined a small but growing number of doctors worldwide performing such surgeries.

While there are some promising reports that the operation may relieve pain, there is not yet enough evidence of safety and effectiveness

The procedure, often called clitoral reconstruction or restoration, is viewed with caution and scepticism by some medical experts. The World Health Organisation says that while there are some promising reports that the operation may relieve pain, there is not yet enough evidence of safety and effectiveness. The organisation advises against raising unrealistic expectations, especially for women seeking sexual improvement.

Still, demand for such operations is growing in western nations as more women who have been genitally cut move to countries where medical techniques are advanced, insurance often covers surgery, and women can make decisions about their bodies.

Dr Percec regularly performs plastic surgery for medical or cosmetic reasons, including labiaplasty to reshape the inner labia, but, until Sillah contacted her, she had never tried clitoral reconstruction on women who were cut.

Her most complex patient so far is a health professional from Sudan, where 87 per cent of women have been cut. Like many Sudanese women, this patient underwent the most extreme form called infibulation: clitoris, labia majora and minora are severed, labia are repositioned and the vagina is sewn mostly closed, requiring surgical opening for childbirth. Infibulation makes urination, menstruation and sex arduous, and increases risks of pregnancy complications.

The 30-year-old patient, who asked to be identified only by her initials, SA, because relatives in Sudan were unaware of her 2017 surgery, said she was infibulated at age nine. She was told that it was needed to reduce sexual sensation and prevent promiscuity, and that “when you become tight, your husband will love you more”.

In her 20s, she married a Sudanese American man she met via Facebook. Her husband said he was determined to be sensitive about her discomfort so she could “be enjoying her wedding night without being scared”.

Still, she said, for a while, sex hurt. She never had an orgasm.

Dr Percec cut through her stitching and scar tissue, removed a large uncomfortable cyst that resulted from the circumcision, widened the vaginal opening and surfaced the remaining clitoris.

SA so appreciated her new anatomy that she frequently looked at it with a mirror. After weeks of recovery she felt more sensation, and intercourse became more comfortable. “It was so tight,” she said, and she has since given birth without complications. “Now, relations are much better.”

As her wound healed, her labia fused together, leaving a narrow opening

For Sillah, the trauma of circumcision began at age seven, when she was blindfolded and cut, causing “the most excruciating pain”.

She was told, “This is what makes you a woman.”

As her wound healed, her labia fused together, leaving a narrow opening.

After joining her mother in New Jersey at 16, she held off on dating, fearing men would be appalled. When she finally had sex, she said, “it was so painful”.

Dr Percec counselled Sillah, now 36, to inform her husband, Mtijan Kamara, about the operation – an emotionally difficult request because Sillah had told him before they married that she had not been cut. Although he was also from Sierra Leone, he was raised to oppose cutting.

“You sure?” he replied, surprised because, unlike some women who have been cut, she experienced sexual pleasure. He comforted her, saying, “you’re fine, leave it as it is”. But because she feared pain with future pregnancies, he supported her choice.

After she awoke from surgery, Dr Percec announced remarkable news: “I found your clitoris.”

Sillah said she felt complete as a woman for the first time. “Like wow – I actually have a clitoris sitting there,” said Sillah, who now lives in Maryland. “I always had an orgasm but, oh my gosh, it’s so much better.”

Female genital mutilation is a centuries-old practice that varies by culture. International efforts to end cutting have been somewhat successful, but it persists in many countries. It often involves severing a girl’s visible clitoris, while the rest, several centimetres or more, remains beneath the surface.

One pioneer of surgery to counteract the effects of genital cutting is Dr Pierre Foldès, a French urologist, who helped found a humanitarian organisation, Doctors of the World. He realised that the uncut clitoris was sealed underneath scar tissue, often pushed back and up, adhering to the pubic bone. He devised a technique to unearth the clitoral remnant and shift it into position by detaching connective tissue called a suspensory ligament.

He said he had operated on about 6,000 women, mostly in France, and trained about 200 surgeons, primarily in Africa. He led the largest, most comprehensive study of clitoral reconstruction, involving 2,938 women from 1998 to 2009, although the study had limitations, including that he assessed his own work.

Post-surgical complications, like blood clots and fever, were experienced by 155 women, 108 of whom required brief re-hospitalisation. Longer-range results were assessed in a one-year check-up, which less than a third of the patients attended. Most reported “improvement, or at least no worsening, in pain and clitoral pleasure”.

Why do women have to be considered incomplete or sexually deprived? Maybe the woman already has orgasms. She doesn’t have pain, but she wants the surgery to feel more like a woman

Some experts are much more cautious about recommending or performing clitoral reconstruction. Dr Jasmine Abdulcadir, an obstetrician-gynaecologist at Geneva University Hospitals in Switzerland, trained with Dr Foldès, but said she had agreed to requests for clitoral surgery for only about 15 women.

She is a co-author of a review of clitoral reconstruction studies that concluded more evidence of safety and efficacy was needed. “Why do women have to be considered incomplete or sexually deprived?” she said. “Maybe the woman already has orgasms. She doesn’t have pain, but she wants the surgery to feel more like a woman.”

Unless women are in pain, Dr Abdulcadir requires they wait three months and undergo counselling and psychosexual therapy. After that, she said, less than a fifth choose surgery.– New York Times