The myth that migrants spread diseases 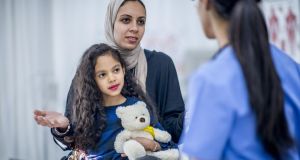 Myths that migrants spread diseases or that migration is bad for public health were dismissed recently at a special seminar at the graduate entry medical school in the University of Limerick.

Migration and the health of refugees and migrants in particular is one of a number of issues in health where the truth is in danger of being eroded by myths and falsehoods.

In an effort to address this the World Health Organisation (WHO) has published a new report on the health of refugees and migrants in the WHO European Region, which was launched at the special in Limerick.

With the strapline No Public Health Without Refugee and Migrant Health, this is the first WHO report of its kind which sets out to establish the evidence and counter the many damaging myths around migrant health.

Writing in the foreword to the report, Zsuzsanna Jakab, WHO regional director for Europe, said, refugees and migrants enjoyed the same human right to health as everyone else.

“One key priority is enhancing social protection for refugees and migrants, including developing sustainable financial mechanisms, both nationally and internationally, to provide for universal health coverage and social protection.

“Another key priority is reducing the xenophobia, discrimination and stigma often experienced by refugees and migrants through actions such as advocacy and evidence-informed communication with both refugee and migrant communities and host populations.”

According to the WHO, “almost one in 10 people in the WHO European region is currently an international migrant”.

“Finding work is a major reason why people migrate internationally, although violence, conflict, natural disasters and human rights abuses are also contributors. Migration and displacement are social determinants of health affecting the health of refugees and migrants.”

The WHO seminar in UL on refugee and migrant health was part of a series of events that took place in cities across Europe, including, Athens, Rome, Moscow, Ankara and London, and it was attended by Dr Santino Severoni of the division of policy and governance for health and wellbeing, WHO regional office for Europe.

Speaking to the Irish Times, Dr Severoni, who oversaw the report, underlined the importance of a universal approach to public health, which he said meant ensuring access to healthcare for all regardless of ethnicity or nationality.

Dr Severoni said there was a need to strengthen and accelerate investment in research into the public health aspect of migration, and that migration health must be discussed and considered in all aspects of population health.

Commenting on myths surrounding migrant health, Dr Severoni said there was a lot of confusion and misinformation even among healthcare workers and policy-makers in the healthcare sector which needed to be addressed.

“There are a number of misinformation or gaps in terms of evidence which are extremely dangerous because they can produce a stigma,” he said.

In relation to specific diseases, the WHO report found that for HIV, for example, “there is growing evidence to suggest that a significant proportion of refugees and migrants who are HIV positive, including those who originate from countries of high HIV prevalence, acquire infection after they have arrived in the region”.

The report also points out that in Europe refugees and migrants are more likely to be diagnosed at a later stage of their HIV infection. The reasons for this include “stigma and discrimination; migrant status and fear of administrative consequences; gaps in HIV testing services among refugees and migrants; and barriers to uptake and lack of understanding of service availability”.

Furthermore, the report highlights that the process of migration itself can “create additional vulnerable situations where infections can occur, such as exposure to sexual violence (with potential for transmission of sexually transmitted infections), substance abuse and secondary risk-taking behaviours linked to poverty, isolation and marginalisation”.

Commenting, Dr Severoni said one of the biggest myths around refugee and migrant health was the direct link made by too many between migrants and the spread of infectious disease. “The spreading of infectious diseases is related to certain exposure to risk and behaviour which is exactly the same for any person in our society.”

Dr Severoni added that while the perilous journeys migrants were forced to make may increase their risk of contracting disease, for example, if they don’t have access to clean water, there was also a myth that once they arrive they are at risk of infecting the host population, and this, he said, was also untrue.

A further myth busted by the WHO report was that the spread of disease only moves from south to north. Dr Severoni said the reality was that anyone travelling to a tropical country was at risk of contracting a tropical disease.

In relation to non-communicable or chronic disease, the WHO found that on arrival refugees and migrants appear to be healthier and have lower prevalence rates for many non-communicable diseases compared with the host population.

However, “prevalence rates, especially for obesity, begin to converge with longer duration of stay”, says the report.

Dr Severoni explained that once they arrive in the host country migrants are two to three times more likely to contract a non-communicable disease compared to the resident population.

Therefore, Dr Severoni said it was vital to ensure that the entire population including migrants and refugees had access to preventative medicine, and that a universal healthcare system was in place.

However, he said it was important not to generalise for all non-communicable diseases as, for example, the evidence shows that while there is a reduced incidence of most cancers among migrants, this was not true for cervical cancer which is higher in migrant women, mainly due to a lack of access to screening and vaccination.

Participants at the Limerick conference on refugee and migrant health included Alphonse Basogomba. Originally from Burundi, Mr Basogomba arrived in Ireland in 2004, and spent 11 years in direct provision in Limerick. While he said he did not have personal experience of difficulties accessing healthcare, he was aware of those that did.

Mr Basogomba said some refugees and migrants were afraid of accessing healthcare when they became unwell in the host country due to the real fear that being sick would affect their application or legal status. Unfortunately, he said that for some, the fear was so great that they did not access healthcare until it is was too late.

“Some people fear that if they find I have this disease I won’t get my status so they hold on until it is too late.”

Prof Anne McFarlane, chair of primary care healthcare research at the graduate entry medical school in the University of Limerick (UL) , is one of Ireland’s foremost experts in migrant and refugee health.

It is testament to Prof McFarlane’s pioneering work involving migrants in health research and policy that the public and patient involvement research unit at the graduate entry medical school in the UL which she established has been designated by the WHO as one of just five collaborating centres for migrants’ involvement in health research.

Prof McFarlane’s particular area of expertise is around the language barriers that migrants face in their host countries.

“At the moment people are relying on family members or friends or just broken English. Language differences are cited as a barrier to healthcare across countries, healthcare systems and over time. This is a persistent problem, but it can be addressed.

“We need to advocate for migrants’ basic right to have access to healthcare – the right to a communication flow in their healthcare consultations. We need to disrupt the status quo and implement trained and accredited interpreters in our healthcare system.

“This status quo compromises healthcare in all consultations, creates clinical risks and will certainly undermine management of infectious disease and non-communicable diseases which refugees and migrants are at risk of.”

Prof McFarlane said migration was “a global phenomenon” that was not going to go away.

“Irish people will be familiar with migration for many of their family histories. What changes are the patterns of migration. So we do need to understand who is migrating, why are they migrating, where are they migrating from, where they are migrating to, and then it is about understanding the public health implications of that and responding to it because migrants and refugees have a right to health just like anybody else.”

The story of Jack-o’-lantern: ‘If you knew the sufferings of that forsaken craythur’
8