The farm that helps drug addicts: ‘It’s calm here. When everything is hectic, that helps’

At St Francis Farm in Co Carlow, recovering addicts develop skills in horticulture and animal management . . . and the tools to help them cope without drugs 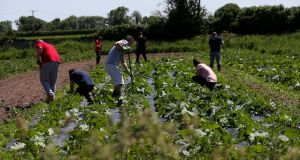 On St Francis Farm outside Tullow, Co Carlow, Norah Burgess, farm manager, is checking on the cows. There’s a hole in the fence, she explains, and they’ve been leaping through it into the potato field. She returns to the farmhouse, which overlooks the land, and relays the situation. Two men offer to fix the fence, and Burgess agrees they can add the task to their schedule.

St Francis Farm is a residential unit, run by Merchants Quay, for the treatment of drug and alcohol addiction. Over 14 weeks, clients go through a programme of talk therapies, seminars, and working on the farm and in the kitchen.

Clients are taught how to grow and look after vegetables, take care of animals, cook basic dishes, and live in a shared space with other people. St Francis Farm, and residential services like it, are for people who have tried other recovery options, such as day clinics or weekly counselling services, and are for when, as Burgess says, “we’ve tried everything else”.

They’ve been very focused on making sure their drug use is taken care of. Trying to get through everyday life can be a struggle

Detoxification is the first step, which clients can do elsewhere, or on the farm. In the secondary step of rehabilitation, Dr Jo-Hanna Ivers, assistant professor in addiction at Trinity College Dublin explains, “the need is to focus on the person’s journey, and do lots of work to help them develop tools that will help them cope without drugs”.

If someone relapses, she says “they’ll often cite the fact that they couldn’t deal with everyday life. It’s the little things like paying the bills on time, keeping the house . . . They’ve been very focused on making sure their drug use is taken care of. Trying to get through everyday life can be a struggle.”

The team at St Francis Farm aims to develop a positive approach to work in the clients, as well as skills in horticulture and animal management. Building a client’s confidence in their ability to “start a job, do a job and finish a job”, as Burgess says, is key. When people in recovery see the kind of work they are capable of doing without drugs, it can be hugely empowering, explains Burgess, as is overcoming days when they may not emotionally or physically feel up to working. And while work is a key element of the programme, the farm remains a therapeutic setting.

“We don’t use chemicals to kill things, so there’s a lot of weeding. And weeding is the sort of analogy I use,” Burgess explains. “It’s like weeding the bad out of your life, to allow the good to grow.”

Crops include potatoes and pumpkins on the land, and courgettes, peas, herbs, tomatoes and berries in polytunnels. There are also five cows, three pigs, 30 chickens, four turkeys and four turkey chicks – which still have some of their down and are just about managing to stand on their own in a huddle. “They’ve been well handled,” Burgess says with a smile.

Every few months, the cows and pigs are sent to the abattoir. This presents challenges for some clients, explains Burgess. “[It] brings up huge issues of sentimentality for people who are not used to this kind of thing, so we have to go through the business of explaining that we’re a farm, we’re here to produce food.”

Ivers says dealing with the day-to-day challenges of farming can be therapeutically beneficial for people in recovery: “It’s tapping into a difficult event, and leading someone along the way and trying to teach them the skills that they could use to cope.” Working with crops, meanwhile, also builds confidence as “it gives a very tangible output – people can see the fruits of their labour”.

It’s brilliant being able to start something, finish it and look back at what you’ve done – that sense of achievement

The clients at the farm echo this. Stephen (not his real name) has been at St Francis for five weeks, and is in recovery from heroin addiction. Originally from Co Cork and in his 20s, he had no experience of farming.

“At the start, I found it a little bit tough. And some days, I can still find it tough, but it is really good because it takes you away from the stuff you’re really struggling with,” he says. “It’s brilliant being able to start something, finish it and look back at what you’ve done – that sense of achievement.

“I’m enjoying myself here,” he adds. “I’m learning a lot about myself . . . I can see positive changes already.”

Stephen has discovered an interest in working with animals and hopes to continue after he finishes the programme. He intends to return to Co Cork, he says, despite the fact that the person who used to sell him drugs still lives in the same neighbourhood. Stephen says he does not feel he has any other option.

Another client at St Francis Farm, Mark (not his real name), is in his late 30s, and began using drugs in his teens. He has been at the farm for 15 weeks, between the detox and rehab units, after years of using a variety of drugs, including heroin and methadone.

“Sometimes it’s a struggle, but that’s usually what’s going on in me. It’s building up resilience in me, that there are sometimes things you have to do, no matter how you’re feeling and that’s something you lose in addiction, as you live in your moods. Your moods dominate you.

“That sense of achievement at the end of the day, no matter whether you’re feeling bad or good, you can still look back and say ‘I did this, no matter what I felt’. That’s massive for me.

“I want to carry on the structure I learn here, and live a normal life.”

Mark wants to continue to an aftercare facility. “I want to give myself as much of a foundation as I can. I’m 21 years using drugs, and at the end of this programme, I’ll only be 21 weeks [clean].”

Challenges remain in aftercare and in the transition back to independent living. The housing crisis is one, as Ivers explains: “Coming out to the vulnerability of not having a home, of not having the control of who you spend your evening with if you end up in a homeless hostel when you’re trying to maintain your sobriety, makes things really difficult.”

Ivers fears the lack of housing supports, and the associated risks, may be discouraging some people from even beginning their journey of recovery. “People relapse because they don’t have the resource they need, such as a house or employment,” she says. “I fear we’re putting people off from trying [to recover], because we’re setting them up for a false start, and they recognise that, as anyone would.”

Supports such as community gardens – some of which, in inner-city Dublin are being threatened with closure – can be an important element of a person’s “recovery capital”, their arsenal of tools for coping without drugs, Ivers says. “If people have a meaningful connection with something, we know that that will pay dividends in their recovery.”

Back at St Francis Farm, Mark, Stephen, and the other clients are preparing for a lunch featuring roasted vegetables from the garden. Conversation turns to the list of farm chores – there is weeding to be done around the onions, and beans to be picked. Stephen and another client are going to mend the fence, so the cows can’t escape into the potatoes again. “The farm is calming,” Stephen says. “When everything is hectic, that really helps.”