My baby didn’t take to breastfeeding. It felt like the sting of rejection

Breastfeeding ‘is the lazy hoor’s way of doing things’, said a friend. But it isn’t always easy 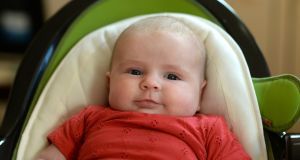 Here is a sentence I never thought I’d write: I spent the evening of my 42nd birthday at the breastfeeding workshop of a maternity hospital.

There were a dozen or so of us there, keen to learn and anxious about scurrilous rumours that breastfeeding was hard and (literally) draining. We practised on very pliable and lucid newborn dolls, and I held mine to my chest with the assured insouciance of Ma Walton of Walton Mountain. The consultant singled me out as a natural three times. “Look at you,” she said admiringly. “You’ve got this!”

Reader, when it came to breastfeeding, I didn’t got this; not by a country mile.

I’d initially entered into breastfeeding with a give-it-a-lash-Jack spirit. If it worked out, fine; if not, no biggie. So why did “failure” seem all the more shocking and upsetting?

Of course, I’d heard friends mention how challenging breastfeeding can be. The latching. The cracked nipples. The emotional hand-wringing. The constant gnawing hunger. Being pinned to the sofa. Cast an eye on Instagram or pop culture, though, and you’d be forgiven for thinking it’s the easiest, most relaxing thing in the world. Babies gazing into their mother’s eyes adoringly, soft-focus mums high on bonding hormones as they rock gently on pastel-coloured nursing chairs. What was up with these friends of mine that they were being felled by the most natural thing in the world, I’d thought?

The thing about motherhood, I’m beginning to realise, is that it upends everything you thought you knew about anything. It’s an ongoing masterclass in humility.

The first moment I realised that there was more to this breastfeeding lark than Instagram let on was when my daughter was just a few minutes old. A nurse started to massage my breasts in an attempt to crank them to life. We both put the baby on one breast; she flailed and shuddered and stiffened like an electric eel, unable to latch. Woah. What sort of weirdness is this? I felt indignant. Offended.

An hour later, we tried for a rematch. A midwife attempted to collect drops of colostrum (the nutrient-dense, antibody-rich fluid that is secreted before breast milk comes in) with a tiny syringe. Panicked, the baby swatted the syringe to the floor. Meeep.

After a while, we achieved lift-off. There was something hugely gratifying about sustaining another human life with my own body. Although, was I actually feeding the baby? She appeared to be suckling away, but was hard to tell if she was receiving milk. With my anxiety rising by the hour and uncertainty hanging over us, a midwife gently suggested that we “top up” with formula. I tearfully gave up the breastfeeding ghost, appalled at myself. That my daughter’s side-eye game was terrifyingly strong at four hours old didn’t help one bit either. I peered down at my aching nipple that evening. It was streaked with angry black rivers of cracks and scabs.

Five days later, at home, I was feeling about 5 per cent more human, and felt ready to take another run at the breastfeeding mountain. My breasts were rock hard with milk and, I now realise in retrospect, at the apex of their gravitational glory, only to droop later. (Honestly, they now look like sad trombones sound.) Still, a lactation adviser friend was only too happy to help with my second stab at breastfeeding. Lisa is a salty lass, and was just the type of person I needed around.

“I’ve seen all my mates’ tits by now,” she proclaimed proudly, brandishing a Haakaa pump in the doorway. And so we took our friendship to a whole new level; with one boob squeaking paltry drops into the Haakaa, Lisa pummelled the other until her elbows ached. Five days in, my daughter had worked on her stubborn streak, and it took three of us to get her to latch. She broke away, screaming, and for some reason, it felt like the sting of rejection. Add this to the scramble of hormones and the ceaseless anxiety of new motherhood, and I was about ready to pack my sore boobs, head for the airport and take a one-way flight anywhere.

A few days later, Lisa came back for another mammary massage and my anxiety was no better. My nipples were mangled from pumping, looking like dropped strawberries.

“Let’s stick baba back on the boob,” she suggested brightly. Tears welling, I shook my head: no. My mental health, already teetering, had to take priority. Any practical lactation adviser worth a grot knows that their job is to encourage mums who want to breastfeed, and to step back otherwise. For all her gung-ho enthusiasm, Lisa was no exception. “Go enjoy your gorgeous family,” she said kindly.

Even so, the guilt continued to chew away at me. Was it because of hormones? The omnipresent cultural messaging that breast is best? The fear of maternal failure? I couldn’t tell. Yet as one pal astutely noted: “It’s clear you love her so much and that’s all they care about. There will be many battles over the next years about chocolate and vegetables, so save your energy for those.”

Nowadays, as I find myself prepping, washing and sterilising bottles ad infinitum, I remember with a slight pang of regret how Lisa described how cheap and uncomplicated breastfeeding could be, once you finally got the hang of it.

“Really, it’s the lazy hoor’s way of doing things,” she said. But there is a bright side to the bottle: I can have the odd glass of wine without it affecting anyone, I can split parenting duties more evenly with B and the baby is thriving and growing at a rate of knots. For all the myriad benefits of breastfeeding, fed really is best … for this family, at least.