Special needs: ‘We love our home, but it can feel like a prison’

Jane Johnstone is sole carer for her two sons, whose complex needs sometimes keep her up all night 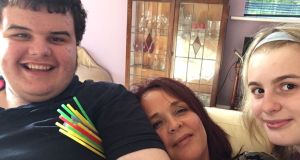 Jane Johnstone with her son Evan and daughter Ciara.

Looking after a family can be hard work, particularly if anyone needs additional care.

But life for Jane Johnstone is especially difficult, as two of her three children have special needs.

“Evan (18) and Daniel (14) are on the autism spectrum and while both have significant needs, Evan’s are far greater as he is non-verbal, has a degenerative eye disease and mobility impairment,” explains Johnstone. “Evan is 6ft 2in, while Daniel is growing to be just as tall and they have very different needs, which can make caring for both at once complex and challenging.

“My husband, Rod, passed away in October, 2014, after a cardiac arrest, which was a huge loss to us. I know we were incredibly lucky to have found each other and I will always be grateful for that. But, as he passed away at 50, our time together was far too short. They say time heals, but it doesn’t really – it just teaches you how to carry the pain. We didn’t just lose him on that darkest day in October, 2014 – but every day when we wake up to his absence. He is still the driving force behind us and the best way that our children and I can honour him is by living the best lives we can.”

The mother of three, who used to work as a psychotherapist, is sole carer to both her sons, whose combined needs sometimes keep her up all night. During term time, she gets up at 6.30am to get them ready for school and while they are gone, she uses the time to sort the jobs which cannot be done once the boys come home. “During the school year, the early afternoons are a crazy tizzy of running between both boys to give them what they need as quickly as possible in an attempt to avoid meltdowns, which happen inevitably and leave me trying to soothe both at the same time but feeling guilty as one invariably gets more support than the other,” says Johnstone, whose eldest child Ciara is studying in Dublin but is currently home for the holidays.

“During the summer break, we live on a wing and a prayer, but the hardest part of my life is the isolation – when the door is shut behind us, we cannot leave as it’s far too much of a risk. I regularly look out our kitchen window and watch cars drive by and wonder where people are going and imagine what it must be like to have such freedom; to just go to the shop to buy a pint of milk or for a walk along the beautiful beaches on our doorstep, which are totally inaccessible to us. We love our home, but it can feel like a prison as the walls feel like they are closing in and there is no way out.”

The devoted mother describes her eldest son as one of “the most vulnerable citizens in society” as he looks like a man but has the developmental age of a toddler, has only 50 per cent vision and no ability to speak.

He turned 18 on May 1st and is no longer eligible for the care he received from the State. And despite the endless work she does each day (and night) caring for her sons, Johnstone says the most time-consuming of all is the laborious task of trying to secure adult services for Evan, who she wants to remain at home with her, but needs help in order for this to happen.

“I have had a total of 11 meetings with HSE senior management regarding the cessation of Evan’s services and much time, preparation, anxiety and stress has preceded each meeting,” she says.

“Until recently, these endless meetings had no positive effect. At each one, I set out my stall, pleaded and even begged for what my boys need to remain in my care but my pleas have often fallen on deaf ears as my family and I became ‘a problem’.”

The 48-year-old widow has also written to various Ministers to highlight the problems she faces but each time has been told that it is an issue for the HSE. “It’s simply not good enough to hand over wads of cash to State agencies while they remain unaccountable for it because the bulk of the disability budget is not reaching the people it’s intended for – so where is it going and who is watching those entrusted with it,” she says.

“And if the Ministers do not hold the HSE to account then it is down to people like me and many other parents across the country to do so – but I don’t think that’s fair because we are already doing our job.

“My pleading, begging and crying got me and my boys nowhere and it was only when I went public about our dire circumstances that a resolution [the suggestion of some private respite funded by the HSE] for Evan’s adult services was given. But the process takes a lot of time and I am desperately and urgently attempting to secure support for him for August as it’s always the hardest month for us and somehow we have to make to September.”

Despite the care involved, the Wexford woman says it makes no sense for her son to go into care when it costs less to provide respite so he can live at home with his family.

“On many occasions it was suggested that residential care might be the only option for Evan but it was never an option for us,” she says. “We had already lost Rod and it would have completely broken us if we lost Evan too – and the crazy thing is that the package enabling him to remain living at home is a quarter of the cost of what residential care is.

“There are many, many wonderful and dedicated people who work in the frontline in the HSE and in service provision and this is difficult for them too as the system has become out of control and rather than planning for our future it is consumed by putting out endless fires in a desperate attempt to save itself.

“I’m very grateful for any help, but I have to question if it was motivated by an effort to silence me rather than genuine care for my sons – but my silence is not so cheap and we need to continue to highlight the issue as to how we treat families who are different until it changes – and it has to change, drastically.”