How to limit your child’s screentime

If you want to monitor your child’s online activity, there are apps out there for the task 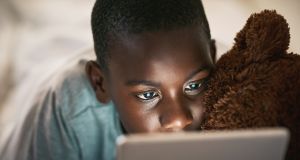 A study by the Economic and Social Research Institute published earlier this year found those who owned a phone at nine years’ old performed worse on standardised maths and reading tests. Photograph: iStock

How much time do you spend on your smartphone? How about your child? If you don’t know the answer to either of those questions, perhaps you should.

While there are benefits of owning a smartphone, the pitfalls have also been documented. A study by the Economic and Social Research Institute published earlier this year found those who owned a phone at nine years’ old performed worse on standardised maths and reading tests.

The average Irish smartphone user picks up their phone 55 times a day, research from Deloitte published last year found. That was slightly lower than the year before, but more people are concerned about their excessive smartphone use.

So what can you do?

If you want to monitor your child’s online activity, there are plenty of apps out there that will take over the task, keeping an eye on what apps they are accessing, allowing you to set time limits and block certain apps from their phone altogether.

If you want the basics, you can use the tools designed by Android and Apple for their respective devices. Google’s tool is Family Link, a parent app you can download to your own iOS or Android phone and a child app for the smartphone or tablet you want to monitor. Five minutes with the child’s phone is all you need to set it up, and once the app is installed, the parents’ app can keep an eye on screen time, manage what apps they can use, lock their device and see their location.

Apple offers a number of restrictions built into its iOS mobile software so you can stop your child accessing certain apps – you can lock down Safari web browser, for example, or stop them from installing new apps – and password-protect it so the restrictions can’t be undone. If you have an Apple Family account, you can add your children as family members and get regular reports on their screen time. That screen time report can also be used for your own devices, so you can keep a close eye on your own screen habits, and you can choose to limit time spent on certain apps, or use Downtime to stop using your phone after bedtime.

Irish company iKydz has developed software products that will monitor up to three mobile devices for €5 a month. It works on Android phones and will not only monitor and control mobile network access, but it will also control access to Wi-Fi networks. You can set schedules for access – no nighttime access for example – and filter out apps and content you don’t want to access.

The downside? There is currently no option for iOS devices, so if your child has an old Apple phone, you won’t be able to use it – for now.

Another option is OurPact, an app whose name makes it sound like something we are all in together, rather than parents imposing their will on their children. Another Android-only monitor, you can use it to track your child’s location as well as their internet time and use history.

Like many of its rivals, Qustodio claims to be the best parental monitoring software out there. They can’t all be the best, but Qustodio does offer some good features to keep an eye on what your child is doing on their phone. The software can be installed in minutes on both iOS and Android devices, and all you need is five minutes of access to the phone. There are two versions: free and paid. The free version gives you the option to set time limits for device usage, designate restricted times and filter web content. The premium version offers all of that plus the ability to see your child’s location on a rolling timeline, limit access to apps and games, and on Android devices, hit a “panic button” if your child is out of contact, and monitor SMS and calls.

That obviously requires giving the software permission to access things like location, the movement sensors in the phones, and to install itself as a VPN on the child’s device. That obviously gives a certain amount of remote access to the phone’s activity, but once you do you’ll have access to regular reports on the phone’s activity, and you can schedule time limits for devices. Once your time is up, it’s up. The premium plan costs $55 for the entire year to protect up to five devices.

It’s not just children who need to keep an eye on their screen time though; we could all do with a closer watch on how often we are using our smartphones. As previously mentioned, you can get screen time reports from Apple each week on your smartphone and tablet use, and use it to limit time on certain apps.

If you do decide you have a problem, perhaps you should take a look at a digital detox app, such as Space, Mute or Zen to break bad habits.

Practise what you preach and all that.

Phones Special
- Can mobile phone use cause cancer?
- Medical devices & apps on phones
- Smartphone addiction
- ‘An extension of my arm’
- Limiting your child’s screentime
- Monitoring my daughter's phone
- Parents need to lead by example
- Teenagers on the phones in their hands
- How ‘technoference’ impacts parenting
- The schools banning mobile phones
- Spending months playing video games
- Using your phone in the supermarket
- Do you run with your phone?

The Kerryman working for a charity in Melbourne: 'It's a challenging time'
Real news has value SUBSCRIBE