‘We are looking at a perfect storm,’ says Asthma Society of Ireland 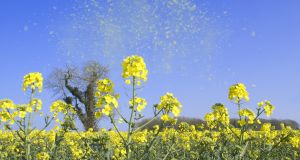 This week’s unprecedented heatwave has been joyfully welcomed by the Irish population – who have (if they could) spent the week lying on beaches, walking outdoors, tending to the garden and eating ice-cream in the sun.

However, for the fifth of the population who suffer from hay fever, the fine weather has been less enjoyable.

With the recent high temperatures, hay fever sufferers are being urged to keep an eye on pollen counts – especially those with asthma and those who work outdoors.

“We are looking at a perfect storm,” warns Sarah O’Connor, chief executive of the Asthma Society of Ireland. “Pollen levels generally reach their peak around this time of year and this week’s weather is only increasing that. Already our pollen tracker shows pollen levels are at what we consider to be their highest in some areas and it is set to continue and escalate.”

None of this sounds promising for those already feeling the flu-like effects that high pollen levels bring.

So what exactly is hay fever?

Hay fever is an allergic reaction caused by pollen that affects the nose and sinuses. While many may feel silly for complaining about the effects, the symptoms can be quite taxing and affect daily life. Common symptoms include: a runny nose and nasal congestion; itchy and watery eyes; sneezing; headache; fatigue; and difficulty sleeping.

Should I be concerned?

The symptoms of hay fever can be significantly eased with over-the-counter medications and most sufferers easily go about everyday life. However, the Asthma Society is warning the 376,000 Irish people who have asthma and suffer from hay fever to take care as the warm weather continues. “Managing asthma becomes more difficult over the summer,” says Dr Marcus Butler, medical director of the society.

“Research suggests that up to 80 per cent of people with asthma notice a worsening of symptoms due to allergies such as pollen, which leaves them at risk of a more serious asthma attack. It is vital that all asthma patients with pollen or grass allergies have an asthma action plan and prepare for the hay fever season to limit its effects.”

What can I do to ease my symptoms?

There are a range of treatments available from your pharmacist that can dramatically reduce the symptoms of hay fever, and free you to enjoy the glorious weather, including antihistamines, decongestants, nasal sprays and eye drops. The Irish Pharmacy Union advises anyone with hay fever symptoms to consult their local pharmacist about the best treatment methods.

They also suggest the following to help prevent symptoms:
- Keep doors and windows closed at home and when driving.
- Apply a little Vaseline inside your nose to trap the pollen.
- Wear sunglasses.
- Avoid cutting the grass and working in the garden.
- Don’t dry clothes outside.
- Change clothes and wash your hair, hands and face after spending time outside.
- Consider buying an air purifier to remove allergens from the house.

Ross O’Carroll-Kelly: ‘Sold to the man in the Ireland jersey with a bowtie tied around his neck!’
9