Parents have no idea how much smartphone usage is healthy for children, experts warn 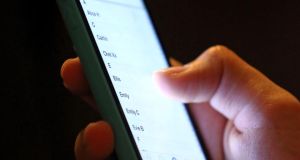 Parents do not know how much screen time is healthy for their children, an Oireachtas committee heard on Wednesday.

Lack of guidance is leaving parents “disempowered” in managing their children’s smartphone or computer usage, health experts told the Oireachtas Committee on Children and Youth Affairs.

Dr Aileen McGloin, director of marketing at Safefood, an all-island health promotion body, said their research found parents were seriously concerned with the amount of time their children spent looking at screens.

“Screen times rose to the top because parents are so concerned, and so utterly disempowered,” Dr McGloin said. Parents reported difficulties tackling children’s smartphone and screen use “in the face of no clear guidance” on how much usage was healthy.

If parents wanted to reduce the amount of time their children spent looking at screens, they needed to address their own usage, as part of a whole-family approach. “We all have to make the changes, and actually for a parent to face up to that is quite difficult,” she said.

Mr Sherlock said the idea of children spending two hours looking at a screen “seemed almost nostalgic now by today’s standards”, and health authorities needed to examine what effect smartphones and other technology were having on young people’s activity levels.

John Treacy, chief executive of Sport Ireland, said they were “acutely aware” of the impact smartphones were having on the amount of physical exercise children were getting.

“One of the things we would have been looking at 10 years ago was television time . . . That was a huge factor in terms of the number of hours kids were watching television. It was up to two hours a day,” he told the committee.

Mr Treacy said that sports are increasingly focusing on participation rather than results at under-age levels. Previously, GAA, football and rugby were “hugely competitive” for under-12s, which was “putting children off”.

“We need to make sure the kids are not really competitive at too early an age, and their experience should be fun, enjoyable, and even if they lose by 12 goals, it is still a great performance,” he told committee members.

Mr Treacy also said that teachers and school boards of management needed to see physical education as “investing in children’s health for life” and that school should not just be about “reading, writing and maths”.

The committee was hearing from health experts and sporting bodies as part of its work looking at the problem of childhood obesity in Ireland.