Ruby Wax: ‘I didn’t like mindfulness – it sounds too vegetarian’

The comedian’s advice for a stressed world: ‘If you feel the red mist descending, leave the meeting’ 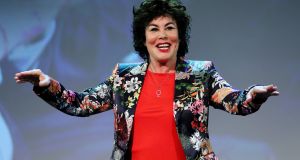 The room is lit red as “highly respected comedienne” Ruby Wax is introduced to the main stage of Dublin’s Convention Centre by event host Sile Seoige. This is the first day of the Pendulum Summit in Dublin, “the World’s Leading Business and Self-Empowerment Summit”, and the crowd is charged up on the free coffee and Vit Hits and poised for note-taking.

Wax is here to take everyone down a peg or two, in a good way, and she begins by questioning why we are all striving for perfection. “When did the idea start that we are supposed to be perfect?” she asks. “We share 25 per cent of our DNA with a banana so get over yourselves. On the evolutionary scale, we’re a work in progress.”

The raucous Ruby Wax, a long-time chat show host, and script editor for Absolutely Fabulous, graduated from Oxford University in 2013 with a Master’s degree in Mindfulness Based Cognitive Therapy and was awarded an OBE in 2015 for her services to mental health. This change in tack in her career was spurred on by her own struggles with depression. “If you’ve got a disease, use it,” she says. “Luckily, it wasn’t herpes.”

Mindful of the business concerns of her audience, she mentions the billions lost every year from absenteeism due to mental health issues. “Mental is physical. If any other part of your body gets sick, you get sympathy, except for the brain and that’s the mothership.

“The contemporary problem is we’re getting stressed about stress, we’re in these endless loops. We’re living in an environment of total threat, physical and social. We don’t know what will get us, North Korea or too much salt.”

She speaks about our modern tendency to use our stress levels as a status symbol. “We have to learn that stress eventually becomes chronic and burns out your immune system.”

Wax is acting president for the British relationship support charity, Relate, and has written bestselling books, Sane New World and A Mindfulness Guide for the Frazzle, and this year’s How to be Human: A Manual, which she wrote with input from a monk and a neuroscientist.

“I love the science!” she declares before reading a piece on neuroplasticity and how we can retrain our brains.

Ironically, Wax’s talk on mindfulness and focus is a little all over the place, but she is ever the charmer, full of energy and cheek and armed with the tools of her stand up past, she knows just how to win over a crowd.

When she talks about techniques to manage our chattering minds, she pre-empts any scepticism. “I didn’t like the word mindfulness because it sounds too vegetarian.”

But she is a convert. “Mindfulness is not saying hello to your dishes before you wash them.” It is instead “checking the weather inside the way you do outside”. She does a mindfulness exercise with the crowd telling them: “You can do it anywhere, you don’t have to be sitting on a gluten-free cushion.”

Audience members constantly clutching their phones are reminded by Wax that “we made computers so we would have spare time and they would do the boring stuff. Now, we’re distracted the whole time. Our most precious commodity is attention and we’re giving it away and then it’s turned into hard cash.”

Coming back to the personal, she tells the crowd how she was “hustling the whole time my kids were growing up. Now when my kids talk to me, I really focus on them. They don’t know what’s happening.

“If you give another human being your attention, that’s the ultimate. Wherever you focus your attention defines who you are in that second. If you’re in the Maldives thinking about the office, you might as well get right back on that plane.”

Wax sums up by reminding the crowd of taking responsibility for their own mood – how panic and anger can be contagious. “As leaders, it would be beneficial to not spread your toxic state to the rest of the company.” They have the power to either make their company a place of toxicity or a place of wellbeing.

“If you feel the red mist descend in a meeting, leave the room. Rage used to be my drug of choice, now it’s the pause that’s everything. It doesn’t always have to be about the bottom line and hitting the target. It can be about making people feel like people care.”