Post-polio syndrome affects 7,000 people who ‘don’t have time to wait’ 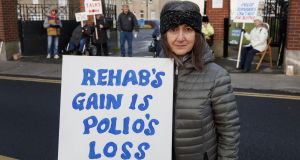 Josephine O’Reilly, from Dún Laoghaire, protesting at Rehab with the campaign group Justice for Polio Survivors in 2018. Photograph: Andres Poveda

“Polio” was a word that struck dread into the hearts of Irish parents during the 1940s and 1950s. Until the invention of a vaccine, the epidemic could cause paralysis and, in 5-10 per cent of cases, death.

Today, survivors are still living with the aftermath. A number of them say they feel betrayed and abandoned by disability charity Rehab. In 1986, the Polio Fellowship of Ireland (PFI) merged with Rehab, gaining assets believed to be worth about €8 million today, including Park House, a building in Stillorgan. Some survivors say they have long since stopped getting the support they need from Rehab.

Most are now in their 60s or older, although a small number of younger immigrants – including one in his early 20s – are also suffering with the long-term effects of polio, having contracted it in their home country.

Throughout last week, around two dozen polio survivors were requesting services including physiotherapy and mobility aids in person at Park House. A spokesperson for Rehab said that these aids, as with all Rehab services, are applied for and funded through the HSE, adding that the PFI no longer provides supports to people with disabilities.

Susan Dowling is a member of the Justice for Polio Survivors Group. She was four when she contracted polio in 1957. “My mother had taken me to get the vaccination, but they had run out because of high demand,” she says. “Three days later, I wasn’t feeling well and my mother put me to bed, thinking I had the flu. I remember trying to get out of bed, but my legs gave way. Then I spent six months in hospital. I was left with my right leg partially paralysed, my left leg totally paralysed and a deformity of the spine. I had to wear a splint to support me.

“Life with a disability was tough and there was a lot that I couldn’t do. My mother was a devout Catholic and couldn’t understand why God had done this to her. My father took me to every specialist he could think of who might help me. He taught me to drive and bought me a car; this independence was heaven for me.”

For Irish survivors, the PFI, formally established in the 1950s, was a lifeline. It was one of several organisations founded to provide services for survivors which, unlike the majority of charities at the time, were led by lay people instead of the religious orders.

Pat Cullen is another survivor who acquired polio during the epidemic. “My family were one of many that spent many weekends fundraising, including after Sunday Mass,” he recalls. “We went door-to-door as well. With the money raised through the collections, we bought Park House . . . and converted it into a training centre offering education courses and apprenticeships for young people with polio. Because of Park House, polio survivors were able to work and didn’t have to be dependent on the State.”

The last confirmed case of polio in the Republic of Ireland was recorded in 1984 and Europe was declared polio-free in 2002. The 1986 merger of the PFI and Rehab came about because the need for training services had diminished and survivors were assured that services would be safeguarded.

Joan Bradley is another prominent voice in the Justice for Polio Survivors Campaign. “I contracted polio in 1943 but was able to go to school when I was nine. I went on to study radiography at UCD. [When the merger happened], however, we didn’t know that post-polio syndrome was coming.”

Post-polio syndrome can develop in up to 80 per cent of polio survivors, usually between 15 and 30 years after the initial infection. It can cause muscle weakness, pain, fatigue and intolerance to the cold. The campaign group says that up to 7,000 people in Ireland are affected.

“For me, it has brought new weakness to my limbs,” says Bradley. “I’m confined to a wheelchair and I have difficulty swallowing.”

In 1993, the Post-Polio Support Group (now Polio Survivors Ireland) was established to advocate, raise awareness and provide practical support for survivors. After a few years, Rehab began to provide an annual grant of €32,000. Survivors say they felt this was inadequate given the promises made at the time of the merger and the considerable assets that PFI had given to Rehab, but that it was better than nothing.

This changed in 2014. In the same year that Rehab was rocked by a controversy about salaries and expenses, the PFI – which is wholly controlled by Rehab – said it would not be providing any more financial support. After protests, they agreed to one more year of funding, but this has dried up.

“We provide person-centred services that cater to the individual [and] this would of course extend to people with post-polio syndrome should they be referred to our services. But the HSE is the statutory funder for services and supports for charities such as Polio Survivors Ireland and Rehab is a fellow charity, not a statutory agency which can fund charities or services. We have no legal obligation to provide funding to Polio Survivors Ireland.”

Campaigners are seeking talks chaired by an independent arbitrator, but Rehab has repeatedly said it is “facing serious funding challenges and cannot continue to provide financial support to another charitable organisation”.

Dowling says that they are not asking Rehab to provide funding to Polio Survivors Ireland but that it has an obligation to provide supports, services or funding to people with disabilities arising from polio because it has considerable assets that it acquired as a result of the fundraising efforts of survivors and their families.

There’s some chance of resolution on the horizon: following a request by the Oireachtas health committee, Rehab is considering an application to the HSE for funding which would provide support services for people with post-polio syndrome.

“We have survived so many difficulties,” says Dowling. “Polio affected my social life. My ability to walk has deteriorated. I need a mobility scooter and aides to assist with daily living. I rely on my husband for support. Survivors with post-polio syndrome need specialised physiotherapy, occupational therapy, medical devices and home modifications. And we don’t have time to wait.”

Polio: a virus and its prevention

Poliomyelitis is spread through bodily fluids. The virus attacks the nerves which supply the muscles, and this can lead to paralysis of some or all parts of the body. Where it affects the muscles in the chest, people can lose the ability to breathe; in the past, iron lungs kept them alive, but artificial ventilators are more common today. Sometimes, paralysis is only temporary, but in other cases it is long-term and requires ongoing physiotherapy.

In 2019, a global vaccination programme has largely eradicated the disease. In 2018, there were only 136 cases recorded in countries including Afghanistan, Pakistan and some of Africa’s least-developed countries.

Irish survivors, however, warn against complacency. “The older survivors are now into their 80s,” says Susan Dowling. “When the vaccine was introduced and given to children, the number of cases plummeted. Vaccines save lives, but some people have turned against the vaccine and the concern is that this is going to lead to an increase. Polio is not fun to live with. It can kill. If people stop vaccinating, there’s a genuine danger we could see the disease come back, especially because of international travel.”