Study finds half of cancer patients have a diet-related problem 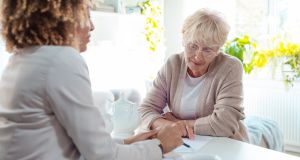 Dr Barry Laird, consultant in palliative medicine and senior lecturer at Edinburgh University said that ongoing muscle loss caused by malnutrition was a cause of death in up to 40 per cent of patients with cancer, yet there were no licenced treatments or standards of care for this condition.

He was speaking at the launch of the first study of nutrition care among cancer patients in Ireland. The study found that almost half of all cancer patients have a diet-related problem and 43 per cent experience unintentional weight loss since diagnosis.

Nutrition consultant, Niamh Rice said that the findings highlight a major gap in cancer care that needs to be addressed immediately. “Poor nutritional intake and weight loss – and loss of muscle mass in particular – is associated with higher risks of complications, poorer response to treatments and even reduced survival,” said Rice.

The research, which was carried out by the Irish Society for Clinical Nutrition and Metabolism with University College Cork also found that nine in 10 cancer patients saw nutrition as very important part of cancer care, yet one third of those who have significant weight loss are not seen by a dietician.

Dr Aoife Ryan, lecturer in Nutritional Sciences at UCC said that while patients are weighed at every appointment, less than 40 per cent of them are asked about eating or diet. “Patients are sometimes referred to a dietician after surgery and not ever seen again or only seen if they have lost a lot of weight during treatment. What happens then is that they struggle on their own or turn to fad diets,” she said.

Prof John Reynolds, academic head of the Department of Clinical Surgery at Trinity College Dublin added that cancer patients have the highest rate and severity of malnutrition in any patient group yet even those with serious nutritional problems are often not receiving the right information. “Nutritional problems can limit the effectiveness of even the best therapies. Prevention of malnutrition and preservation of muscle mass needs to be recognised as an integrated clinical goal within cancer care.”

A €29k cottage? A €90k church? One woman’s search for Ireland’s cheapest houses
8

Where are the best value lunch spots in Ireland?
9