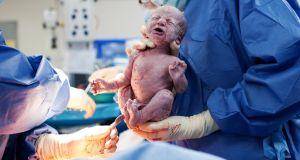 Given the facts of rising maternal obesity and CS in Ireland, what can be said about their relationship? Photograph: iStock

A recent study of almost 68,000 women who presented for antenatal care at Coombe Women and Infants University Hospital, Dublin, found that the overall obesity rate increased from 16.0 per cent in 2010 to 18.9 per cent in 2017.

Writing in the European Journal of Obstetrics and Gynecology, Dr Ciara ME Reynolds and colleagues state that, “overall, maternal obesity was associated with maternal age, multiparity [given birth twice or more], maternal birth in Ireland and the UK, unplanned pregnancy, unemployment, and depression”.

They further note that maternal obesity is associated with more pregnancy complications, such as gestational diabetes and preeclampsia, and more Caesarean sections (CSs).

Although London-based professor Jane Sandall co-authored a report in the Lancet pointing out that “CS is a life-saving intervention for specific complications during pregnancy and childbirth that should be available to all women in need”, she is also quoted in the BMJ as saying: “[T]he growing use of CS for non-medical purposes could be introducing avoidable complications, and we advocate that CS should only be used when it is medically required.”

Given the facts of rising maternal obesity and CSs in Ireland, what can be said about their relationship? Dr Aoife Brick is a research officer at Ireland’s Economic and Social Research Institute, and in a recently published study in the Irish Journal of Medical Science, Dr Brick and colleagues asked whether the increasing CS rate at the Coombe – one of Europe’s largest maternity hospitals – was attributable in part to maternal obesity. The researchers evaluated the records of 50,992 women who gave birth to babies weighing more than 500g between 2009 and 2014. They found that although obese women were more likely to be delivered by CS in 2014 than 2009, statistical analysis showed that the increasing CS rates could not be explained by changes in obesity levels.

What they did find however, was that advancing maternal age was a stronger driver of the increased CS rates.

This is an important finding as national births data show that Irish women are increasingly deferring childbirth.

Dr Brick and colleagues not only observe that the increased CS rates over the 6-year Coombe study period were “strongly associated with advancing maternal age, particularly for nulliparas [women who had not previously given birth]”, they also conclude: “Women need to be made aware that deferring childbirth until after 30 years of age increases their risk of CS, whether they are obese or not.”

Commenting on their findings, report co-author Prof Michael Turner from the UCD Centre for Human Reproduction at the Coombe told The Irish Times that there is concern in high-income countries such as Ireland about escalating CS rates and there is no evidence that the rates have yet plateaued. “There is no single explanation,” Prof Turner added, “for the escalation and it is underpinned by the fact that the CS operation has become very safe. There are also other trends. Obesity rates in pregnancy are increasing, and women in Ireland are deferring having their first baby until their 30s so they can pursue their career or further education. Both obesity and advancing age are associated with an increased CS rate.”

But Prof Turner makes an important point: “What Dr Brick’s sophisticated statistical analysis shows,” he says, “is that in Ireland advancing maternal age is a stronger driver of increased CS rates than maternal obesity”.

In relation to maternal obesity, Prof Turner’s advice to women is that it is easier to optimise their weight before or immediately after pregnancy rather than during pregnancy.

“In general,” he explains, “obesity doubles pregnancy risk and is important because it is potentially modifiable.”

The debate over rising rates of CS and maternal obesity in Ireland has been sharpened by Dr Brick and colleagues confirming “the importance of advancing maternal age as a driver of CS rates in contemporary obstetrics. This demographic trend is beyond our control and it is a matter for a woman’s personal choice, but, it does raise a number of questions. Is a public health campaign required to inform women that deferring childbirth until after 30 years of age may increase their risk of interventions such as CS?”